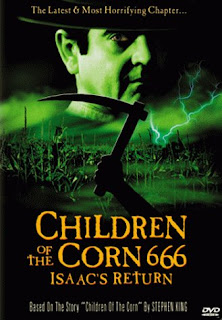 Out of all the horror franchises that made it to six or more entries, this sixth "Children of the Corn" film is the only one to utilize the gimmicky "666" moniker in the title. Sure "Halloween: The Curse of Michael Myers" played with the working title "Halloween 666: The Origin of Michael Myers" but those filmmakers were smart enough to know that the "666" gimmick was lame and dropped it before final release. Well the "Children of the Corn" franchise proved lame enough to use the gimmick and the final result of the film is just as bad as it's gimmicky title.

Well our plot ignores the events of the previous sequels and is a direct sequel to the original film. Since most of the other sequels make no effort to keep continuity to begin with this doesn't come as a shock. The subtitle promises the return of Isaac, the demonic child preacher from the original film. Despite obviously getting killed at the end of that film the subtitle lives up to its promise as he miraculously survives being kept alive in a coma state for 15 years.

We get introduced to a teenage runaway who is traveling to the remote town of Gatlin as she keeps having visions. Well it seems she's destined to return as according to "He Who Walks Behind the Rows" she is to begin a new human race by getting knocked up. While there she meets all sorts of creepy children and adults, including her mother (Nancy Allen) who faked her daughter's death in order to save her from Isaac (events never mentioned in the original film). Her return awakens Isaac and he goes on a by-the-numbers killing spree by yelling commands to his brainwashed cult.

This silly sequel tries to take itself seriously but there are too many god damn dumb moments hindering it. First of all director Kari Skogland gives this film a darker look no doubt hoping it will make it look more "artful" and "serious." I'm not talking about tone here but actually giving the picture a dark brown color making the film rather hard to watch at moments. It's like the director wiped her ass with the negative!

Not helping with the directors choice in coloring the film has insanely dumb plot points. First of all our main character loses control while driving down a dirt path in a corn field and still manages to get pulled over by a cop. Do cops patrol dirt paths often in these parts? While pulled over our main character even has the gale to go into the corn to take a piss while the cop is checking her license. That kind of shit is libel to get your ass shot off!. Not to mention that there are large billboard signs pointing the way to Gatlin in the middle of corn fields.... gaaaaawww!!

This is just another lame sequel into a lame franchise that tries to recapture the likable charm of the original by bringing back that films main villain but just comes off being pretentious and tedious. Again how did this franchise get to have six entries to begin with? Well it's due time to put this franchise '666' feet under but sadly it didn't die as one more sequel (and one more in the works) would infect video store shelves in 2001.