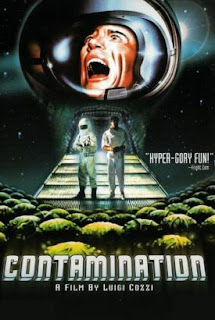 After suffering through the retched Italian "Alien" rip-off "Alien 2: On Earth", I decided to revisit another retched Italian "Alien" rip-off with Luigi Cozzi's "Contamination". Why the hell would I want to do that? Wouldn't that be like eating a plate of shit and asking for seconds? Well the subtle difference between this and that asinine motion picture "Alien 2" is that this one actually manages to be entertaining in its sheer ineptitude as opposed to making the audience drowsy from boredom.

What we got here is an alien conspiracy to destroy all human life on Earth. A Brooklyn cop boards a drifting ship in New York's harbor (a scene very similar to the opening to Lucio Fulci's "Zombie") only to discover grisly corpses and thousands of pulsating green eggs. Before anyone makes a 'green ham' reference let me say up front that these are not eggs one wants to eat as they explode when ripe, covering people with some strange green goo which in turn makes the individuals chest and stomach explode and a barrage of blood and guts. Why do you ask? No other reason than because chests that burst out with blood and guts is EXTREME. These kiwis from hell are all somehow tied to a mars mission and a coffee plantation in South America where an Alien is mind controlling people to cultivate it's eggs and spread them for mass murder. Now it's up to an ugly female army colonel, a Brooklyn cop and an alcoholic ex-astronaut to save the world.... I guess that means we're all fucked.

Why in the holy hell would the United States only send three people, two not even military or scientists, to scope out this egg farm when they know damn well it could be the start of an apocalyptic wave of chest bursting? Wouldn't we want to send the entire armed forces along with scientists to... I don't know... save the possible demise of the human race? This is one of only many ridiculous plot aspects of this silly little film but they all only manage to add to the sheer hilarity of this unintentional laugh fest. My personal favorite is after landing in South America our Colonel has an assassination attempt on her with an egg yet they go on later in the day going to the coffee plantation posing as possible buyers when it's obvious the assholes already know who they are! And they wonder why they were captured so flippin' easy. All I have to say is if these are the best people we got to save the world then the human race deserves to die.

Director Luigi Cozzi (using his Americanized pseudonym Lewis Coates) was definitely inspired by "Alien" for this flick with the "egg" concept and even the "chest bursting" sequences but he also throws in a little "James Bond" type world domination plot device as well as a few nods to 50s B-science fiction films. Hell there is even a reference to an old "Star Trek" episode by having the Alien eggs be silicon based as opposed to carbon. What kills the film is the awful (yet hilarious) dialogue, insane plot holes and ultra cheezy effects. Cozzi does what he can to salvage the film from the silly effects with some clever editing tricks but only he is to blame for the awful dialogue... but it's wonderfully awful dialogue so I can't harp on him too much for that.

Against Cozzi fashion the filmmakers casted a rather homely woman as our lead considering Cozzi is known for having gorgeous bombshells in his pictures (most notably the curvy Caroline Munro who ran around in a space bikini in "StarCrash"). Underrated British actor Ian McCulloch (whom Italian cult film fans may recognize from "Zombie" and "Zombie Holocaust") saves the picture as the alcoholic astronaut who doesn't like his manhood criticized.

Sure "Contamination" (released in the U.S. cut as "Alien Contamination") is bad but how could a conspiracy film with green eggs (pulsating to a hilarious sound effect), a mission to mars, a cyclops alien, gut bursting gore, an alcoholic astronaut, an exploding rat and another bad ass score from the rock group Goblin not be at least a little entertaining. For fans of bad yet entertaining Italian trash.... you have yourself a treasure trove with "Contamination."

As you can tell from Eric's enthusiastic review of Contamination, the film tends to spark a lot of unintentional humor and opinions from its fan base. So it's not a huge surprise that it would be one of the films that cult cinema distribution label Arrow Video would want to endorse. The film is, generally speaking, quite terrible - but there is a lot to love in its cheesy, often mind boggling energy. The latest blu ray release of the film features that same kind of energetic dedication to the cause. The new high definition transfer is a stunner and the release is packed with a slew of special features that any Italian genre fan is going to want to check out. Sure Contamination might leave a lot to be desired when it comes to common sense, but if you're a fan of B-grade horror science fiction then it's common sense that you're going to want to dig into this release.

So if an Italian film about pulsating eggs hatched by a conspiracy led by a cycloptic Martian sounds like your flavor of cinema, you can order your copy of the film at the link below. Courtesy of our friends at Arrow Video and MVD Entertainment!

Posted by Cronosmantas at 7:55 PM