Children of the Corn: Revelation - 1/5 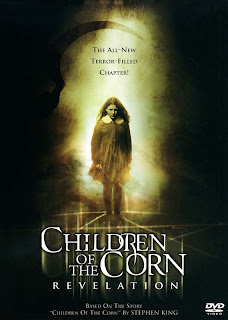 Dimension was pumping out these "Children of the Corn" sequels at a steady rate with one about every two years and for the most part kept the production values rather respectable for each film. This was a feat considering majority of them being direct-to-video releases. This streak would be broke with "Children of the Corn: Revelation", the seventh entry into the series, as the financial troubles in the house of the Weinstein Brothers started rearing its ugly head as this entry looks extremely cheap and it's got a ridiculously dumb plot to go with it making it easily the worst film into the franchise (though Part II could contender for that award.)

After an extremely cheap looking title sequence we get introduced to an elderly women awaking from a nightmare and heading out of her apartment building into a field of corn only to disappear. Her granddaughter gets word so she movies into her grandmother's seedy apartment located in a dilapidated building. This apartment building is home to a bunch of skeezy characters including a foul mouth invalid and a stripper whose sole purpose is to provide the predominately male audience with some nudity. The granddaughter, with the help of a "love interest" detective, discover that the building was built on a location where a mass suicide of a children's religious cult occurred and now the children are returning, killing all the residents one by one.

Since the film has a slashed budget the filmmakers opt to make the movie mostly take place inside the apartment building.... just what I imagine when I think of what "children of the corn" movie should look like. Along with the blah location is shitty CGI corn effects, boring characters, bad lighting and overall cheap filmmaking .

The only thing that breaks the monotony of this cliché film is the appearance of Michael Ironside as a priest... but his character has barely any screen time giving Ironside a nice easy paycheck. Though he solely took this small role for money, his appearance did keep me going, toughing out this film till the end by giving me a second wind.

The "Children of the Corn" franchise should have never had made it to seven entries. Hell Dimension even seems embarrassed by the fact as they opted to not include a number in the title, one of the sure signs a franchise has overstayed it's welcome. This is just another cheap, pointless cliché direct-to-video sequel that adds absolutely nothing to the franchise and only service is to pad the producers pockets with more money from forgivable horror fans. For 10 long years the franchise remained dead but surprise, surprise another sequel is in the works. This of course will just confuse people even more as a horrible made-for-TV remake infected cable stations in 2009.