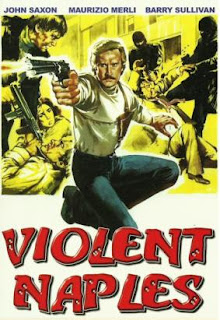 After a successful team up with "Rome Armed to the Teeth", star Maurizio Merli and director Umberto Lenzi teamed up again to bring us the final film into the "Inspector Betti" trilogy, a follow-up to Merli's previous films "Violent Rome" and "A Special Cop in Action" with director Marino Girolami. Like expected Lenzi brings his style and adrenaline approach over into this series making it, at least in my book, the strongest of the three films and one of the best the Poliziotteschi genre has to offer.

Inspector Betti (again surviving getting shot in the back with a machine gun at the end of "A Special Cop in Action"; remember continuity isn't a large concern for Italians) gets transferred to Naples to clean out the crime that is overtaking the city. Crime is so bad that he is nearly mowed over by a mob car moments after getting off the train. His methods are violent and brutal, controversial with his superiors but it gets the job done. In order to break down the protection racket bankrupting local businessmen, Merli takes on the local mob with deadly results.

Merli is again perfect in the tough cop role who has to fight a two war front against the mob and his superiors. He's played this same role so many times that he could do it in his sleep. Yes it's not a stretch for Merli but he's just so damn perfect in these roles and I love seeing him time and again violently kick the shit out of scum. We even get to see the great John Saxon in a small role. No it's not the same role as in "A Special Cop in Action"... remember this is Italy. Much like Leone's "Man With No Name" Trilogy, a lot of the same actors return but not playing the same characters.

Director Umberto Lenzi breaths new life into the "Insprector Betti" trilogy with his adrenaline hyped up style that he brought over with him from "Rome Armed to the Teeth." Nothing against Marino Girolami as his two previous entries were good films but "A Special Cop in Action" was lacking compared to "Violent Rome" and Lenzi is able to recapture the glory of the character and series. He has this film move a mile a minute with amazing, stylized fight scenes and high caliber chase sequences. As expected with Lenzi he also heightens up the violence and gore so no squeamish people are allowed. The most shocking bit of violence involves a fence with a spiked top which viewers will not soon forget.

Umberto Lenzi's mile-a-minute style and Merli's sure hold on the character makes this for one of the most entertaining poliziotteschi films I have ever seen. The action never ends and the addition of more exploitation elements in the form of violence makes this one of the most unforgettable. For my money this is easily the best of the "Inspector Betti" trilogy and I even prefer this to "Rome Armed to the Teeth." If you must only see one Poliziotteschi film make it "Violent Naples" as it contains all the necessary ingredients for an entertaining Euro cult film. Don't worry about it being a sequel as like the Dirty Harry sequels, it can easily be viewed on its own without confusion.