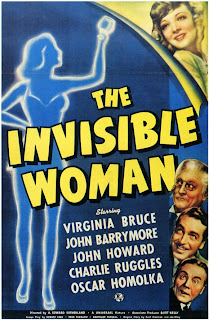 Less than a year after "The Invisible Man Returns" Universal pumped out this third entry to give the fair sex an opportunity to become transparent. "Fair" isn't a great word to describe this film however as Universal opts this time to load on the comedy elements making this as much a comedy as a science fiction film. What the hell is this? You give a women the lead title and decide to treat it as a comedy? How dare you Universal for spitting on James Whales wonderful original!

Not surprisingly there isn't any plot or character connections to the previous two films (perhaps for the better since this film plays more off like a comedy). We have a rich playboy who loses his fortune to women so he is depending on his top scientist to come up with a creation to make him rich again. Thanks to his "Frankenstein" lob props he is able to perfect the art of invisibility but he needs a person to try it on. In comes Kitty Carroll, a pretty model who volunteers for the experiment in order to get revenge on her verbally abusive boss. Lots of hijinks occurs as our invisible women helps defeat some mob members hell bent on getting their hands on the experiment while at the same time falling in love with our playboy lead.

Due to having a women in the lead role they decide to ante up the sex appeal by having sexy silhouettes of our curvaceous actress and even having her parade around partial dressed while invisible. I'm all for sex appeal but this mixed in with the forced comic humor just insults the greatness of the original film. Why did Universal opt for this approach? They could have easily taken a much more serious route with a woman in the lead role and done it successfully. Did they do this for fearing at the time people wouldn't take a film about an invisible person of the opposite sex seriously? Perhaps at the time but it just saddens me to think how good this film could have been with a slightly different approach.

"The Invisible Woman" isn't a terrible film but it is predicable with its plot which is just an excuse to see what awkward situations our invisible woman can get into. I would have much preferred a much more serious approach to the subject matter and audiences must have agreed at the time as Universal would get the series back on the more serious track with the next entry "Invisible Agent."