Hercules and the Princess of Troy - 2/5 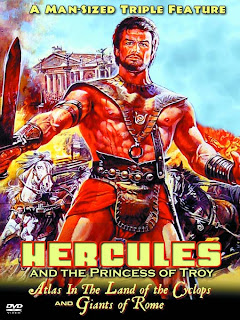 Here is a bizarre entry into the Italian peplum genre as it actually wasn't intended to be a "film" but a pilot for a television series simply entitled "Hercules". Since the series never materialized "Hercules and the Princess of Troy" appeared occasionally on television and on video throughout the years confusing people as to why it only ran a measly 50 minutes long. Now you know the answer.

Hercules (played by Gordon Scott) arrives in a coastal village that is being terrorized by a sea monster to which they are forced to offer sacrifices to. Hercules won't stand for it so he vows to destroy the beast but the city's king has other plans and traps Hercules. Will he escape in time to save the love interest and rid the city of the beast forever?

Considering this was made for TV and only intended to be a pilot for a television show, the production values are actually not bad and on par with many of the theatrically released peplum films at the time. American director Albert Band (father of cult producer/director Charles Band) takes the helm of this Italian production and typical he doesn't show much flare behind the camera but again it's more forgivable due to the TV made nature.

The character of Hercules is also uncharacteristically weaker than many of his film counterparts as he is easily captured and imprisoned. Steve Reeves no doubt would have had a fit with this new portrayal but it makes for the character to be more human and vulnerable, allowing for more hair-raising situations in what was to be a long running TV series.

The best part of this production is the actual monster itself. Sure it's cheesy but it's far better than a lot of other creatures to appear in such films. For a cheesy monster the animatronics are done quite well and add to the overall fun nature to this short production.

If fans of the peplum genre go into this knowing it was made to be a pilot for a television series then I believe they will have fun with the hokey story. I had fun, despite its TV production limitations. "Hercules and the Princess of Troy" also marks one of the last peplum productions to emerge from Italy as cinema soon gave way to the wonderful spaghetti western subgenre.