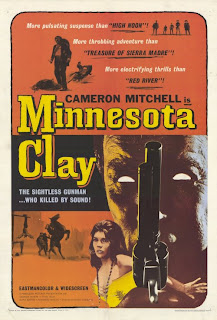 "Minnesota Clay" marks one of the earliest spaghetti westerns to emerge after the success of Sergio Leone's genre defining "Fistful of Dollars" and the second western for director Sergio Corbucci. For an early spaghetti this is pretty decent but it is a couple steps below Corbucci's later genre defining entries "The Great Silence" and "Companeros".

Minnesota Clay (Cameron Mitchell) is a wrongly accused gunman who is doing hard time in the countries deadliest labor camp. He escapes to return to his home town to protect his daughter (whom he hides his paternity from) from the sheriff, the very man who set him up. Can he protect his daughter before going completely blind?

Don't expect this to be the "Zatochi" of spaghetti westerns as this isn't about a gunman who is blind going around and blowing people away. Sure the protagonist eventually goes blind but the plot is pretty standard affair for a western and the film really lacks the baroque and eccentric touches of Corbucci's later films (notably "Django").

Though the approach is more standard for Corbucci (no doubt playing it safe since this is one of his earliest westerns) it still has plenty of Corbucci's strong character elements, especially the close connection between spouses and family. Our hero, also in Corbucci fashion, gets mangled and tortured by the end and has to rise up to defeat the evil antagonist. The look of the film is also beautiful with wonderful cinematography and settings that suck the audience into the plot.

Cameron Mitchell is wonderful as the title character as he is both a gentleman and deadly with his talent. He definitely made the right choice to go to Italy and take starring roles in European genre films as opposed to forgettable Hollywood supporting roles. Due to this he is one of the great cult actors thanks to very films like "Minnesota Clay" and he would ride that cult actor status all the way through the 80's appearing in multiple genres including such blood soaked horror classics as "The Toolbox Murders."

Much like Corbucci's "The Great Silence" there are two separate endings to the film, a downbeat and an upbeat one. Though I cannot find facts on this subject I would guess it would be the same reason he was forced to shoot two separate endings to "The Great Silence" as some distributors wanted an upbeat ending to appease audiences. Thankfully the VCI DVD release keeps the downbeat ending intact and allows the viewer the option to view the "happy" ending separately.

Overall "Minnesota Clay" is a solid spaghetti western. It lacks the over-the-top eccentric elements of such Corbucci classics like "Django" and it isn't as good as "The Great Silence" or "Companeros" but it still has enough elements of a good Corbucci western to appease fans. It's available in some bargain multi film packs but the VCI DVD release is well worth a purchase.

Written By Eric Reifschneider
Posted by Cronosmantas at 11:19 AM