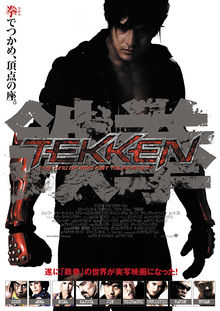 As kids, my brother and I played the shit out of "Tekken 2" on the Playstation and to this day "Tekken" is my favorite fighting game series created. That being said, I was intrigued and scared shitless for the live action "Tekken" film that was made a few years ago and has yet to get proper distribution. Why is Anchor Bay taking so long in releasing this film in America? Oh yeah. It's probably because its not very good. Sigh.

Jin Kazama (Foo) has decided its time to strike. His mother Jun was killed in a raid made in the ghetto...I'm sorry, its called the Anvil here, and Jin is determined to enter the Iron Fist Tournament to get close to those responsible, Heihachi Mishima and his diabolical son Kazuya. To make it that far, Jin must fight through a slew of the worlds best hand to hand combatants in a contest to test his will against the two responsible. What Jin will find along the way is that not is all it seems in the Mishima family and his entanglement is greater than he imagined.

Compared to other films based on fighting games, "Tekken" is not as bad as "Street Fighter" but its not quite as good as "Mortal Kombat". It loves to ride the line of being potentially very awesome, but consistently never making the mark. Although they changed the storyline from the games significantly (where many of the later games actually played out like movies), the plot is rather intriguing. It has some great potential with its familial drama and its futuristic social commentary. Alas, it only remains as potential as the film plays through and the lack of focus and character build hinders any deeper meaning the film could have had. This is disappointing considering all of the things they could have done with this movie.  It's as if the director and writers couldn't quite shake all the cheese from "Tekken" and the film soon succumbs to it.

That being said, most of the film's problems do stem from its cheese factor. Despite some serious tones that the film strives to drive home (loyalty, the big picture of society), the film constantly feels like a film stuck between being a comic book and a basic kung fu movie. The art direction is horrible with its odd colors and cheesy sets (I love the fact that the area can change for each fight into different settings...) and although the fan of the games in me loved that the characters looked like they did in the games, it makes it feel rather cartoonish. And director Little does, as his name would indicate, little to counteract this. He uses horrible editing (very American with its quick cuts), too many flashbacks of cheesy training sequences, and odd direction with his actors to make the cheese factor worse. His obvious by the numbers directing just doesn't cut it as a serious science fiction inspired tale nor as a martial arts film.

Of course though, "Tekken" does have some redeemable moments. The fights are well staged with some very cool (if not cheesy) kung fun inspired moments like how Bryan Fury (played by underground badass Gary Daniels) is practically impervious to blows. The films does a solid job at building the fights and giving them a very game like look (although its pretty repetitive how Jin always wins by random occurrence) and it gives the film a fun feeling not unlike how Anderson built "Mortal Kombat" over a decade ago.

Other than being a fun and cheesy watch, "Tekken" pretty much is a failure. It's focused in all the wrong ways, the director seems clueless on how to build tension or character arcs, and the script is not well written. As much fun as it was to see all my favorite fighters in real life (Jin was one of my favorites as it turns out), "Tekken" is a disappointing film that never truly grasps the story and why the games have lasted so long. Only for fans and even for them, this is a warning.

BONUS RANT: It's obvious that they wanted to franchise this film with how it ends and its post credits scene, but with its lacking distribution and poor critical reception it might be more beneficial to wait for another "Street Fighter" film than another "Tekken" one.

Written By Matt Reifschneider
Posted by DarkReif at 11:08 AM