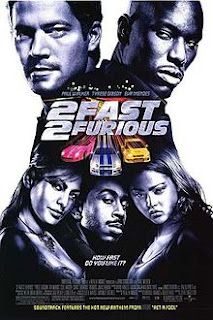 The original "The Fast And The Furious" was a good movie wrapped in too much fluff to be taken seriously. "2 Fast 2 Furious" with its amazingly idiotic title, is a fluff movie wrapped in too much thought. Had they stripped down its "Miami Vice" cliche story to its bare nuts and bolts, embraced the awfulness of its acting, dialogue, and direction, then the movie might have been a blast. As is though, "2 Fast" thinks its the best film ever created when in all actuality its just a wreck...and not the cool kind of car wreck I wanted.

Brian (Walker) is living in Miami, no longer a cop, but lives on a boat and races street cars (just the hero I always needed as a child). When he's busted for street racing, he's brought in to help pin a large drug dealer getting ready to transfer some major cash out of the country. Brian enlists the help of an old friend and fellow car magician Rome (Gibson) to pull off the job.

More or less, the reason that the first film wasn't a great movie was that its balance of cop drama and ridiculous racing action was mismatched. With this film, they decide to ditch any of the good drama (leaving only the poorly developed characters to wade through a half thought through plot) and focus on the fluff. Despite the initial intrigue of seeing more car wrecks and brighter colors, John Singleton (director) seems content on creating a film that's all style and no substance. As pretty as its "Ridge Racer" video game inspired colors and blurry backgrounds is (do they go into Warp Five when they hit the NOS?), the film is a sugary sweet that leaves its audience hungry for more after a few seconds. Not something a film really wants to do.

Partnered with this asinine focus on the racing and ridiclousness of its 'I'm too clever for a plot' formula, "2 Fast" also remarkably lacks any kind of presence as a film. If anything, Diesel's screen presence and the first film's charm was the only thing that kept it a float and with neither the chemistry nor the depth that the originator had, this film sinks and wrecks like so many of the vehicles in this film. It's laughable in all the worst ways with its off the cuff buddy dialogue, glaze like sugary camera shots, and out of this world plot twists. The 'scramble' sequence looks cool, but seems completely out of the blue when one thinks about it.

"2 Fast" is just 2 stupid for its own good. It might appeal to that pre-pubescent boy hood dream of bright colored, fast cars and scantily clad women (was there any purpose to Suki's character?), but as a film it never leaves the starting line. Stalling when it comes to any kind of depth or well executed charm. I don't know about you, but this franchise didn't need all of this show when there was nothing under the hood.