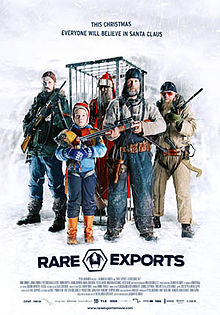 We've all had our share of evil Santa Claus movies, right? Everything from that classic "Tales From The Crypt" episode to "Silent Night, Deadly Night" to "Santa's Slay". In general, its already its own genre and its getting redundant. That is until I saw the Finnish film, "Rare Exports: A Christmas Tale". Although I tend to keep my distance a bit from emotionally investing in 'holiday themed' horror films, this one was too intriguing to pass up. Now I have a new Christmas tradition. Not only does "Rare Exports" execute the film in a very fine manner, but its a refreshing and new take on a genre that is already run aground.

A young boy and his father, who happens to be a reindeer rancher with two of his friends, are disturbed by the archeological dig happening in a mountain close to their quaint town. The explosions have been going on a month and the project is being kept very secret. When their reindeer are all found slaughtered near the mountain, the boy and his father decide that they need to investigate further. What they find is that there is a Santa Claus and he might not be all that modern lore has made him out to be. Now its a race against time as they try to figure out a way to rid themselves of a nasty St. Nick and his elves, before all the world's naughty children pay a vicious price.

What I didn't expect from "Rare Exports" was how well it was going to be done. There had been hype around it and blah blah blah, but really? How could it be as good as some people claimed. Well, it is. The film takes on an almost 80s style mystical feeling for its foundation (not unlike that of some other fantasy/horror classics like "Gremlins") with its child protagonist and three rather hapless hunters who are knee deep in supernatural shit they don't understand. It retains an almost dark comedic tone throughout that really brings this vibe forward despite some of its horror overtones. Great performances from the ensemble cast (although some of the supporting group is a bit miss) help out too. All in all, this film is just well made from quirky beginning to quirky end.

The true gem foundation about this film that makes it such a fun ride is just how clever it is. Based on a short internet film by the same writer and director, the story is a rather inspiring and unique take on the Santa Claus tale. Twisting fairy tales in dark new ways isn't all that new for films, but no one has really touched on this one in such a way. I don't want to give too much away, one of the final twists in the film is quite the shocker and a truly visionary one, but trust me when the horror touches come its flavorful and done in all the right ways. If anything, it was original enough that by the time the film ended I wanted to know so much more. I wanted the story even more fleshed out and brought to light. I'm sure there are thoughts of franchising this into a "Rare Exports" series and if they don't I'll be sorely disappointed.

Although occasionally the film shows its budget with hit or miss CGI and some odd humor that didn't quite work for me, "Rare Exports: A Christmas Tale" is quite the find. It's clever and fresh and never falls into the pit falls it could have with such an ambitious tale. It might have taken the top spot for best Christmas themed horror film for me (my childhood love for "Gremlins" is eternal though) and its definitely a new tradition. Well, worth the watch if you get a chance to see it or it gets the proper US distribution - I had the pleasure of seeing it in theaters in a indie Theater in town.