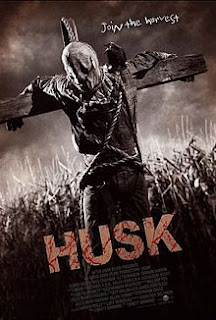 After Dark Horrorfest's 8 Films To Die For was somewhat revolutionary. They did quite a bit to get independent horror out to that larger market and it would seem After Dark Films is out to make themselves a full blown horror machine. Their first set of releases (under After Dark Originals) contains the following film "Husk", a rather new and fresh take on the 'killer scarecrow' sub genre. The film lacks logistics to its plot, but it does strike its own pose on things.

A group of young people (four guys and the plot necessary girlfriend) are on their way to a nice break from the real world. Unfortunately, they cut across some private land and immense corn fields to get to their unseen destination. When a flock of crows decides to play chicken with the car (ultimately both lose), the five youths find themselves stranded in the middle of the sea of corn. When they go to a close house to look for help, they come to odds with some very pissed scarecrows hell bent on their demise. Looks like its the kids that might be left hanging now (haha, that's a scarecrow pun).

Killer scarecrows might not be the most original idea out there (hell, even Goosebumps had a kids book about a killer scarecrow), but this rather clever take on the genre does itself a lot of favors. For every clever thing it does though, it also has a very illogical one. Nails through the fingers so the scarecrows can tear you apart? Awesome. Characters' ridiculous decisions to not formuate a realistic play of escape? Lame. Dead friends becoming part of the murderous army of scarecrows? Awesome. Why do the crows hit the vehicle in the beginning? Unexplained. The film is a constant give and take with this logic. There are even some very cool concepts that when thought through don't make a lick of sense. We discover that removing the hood seems to remove the dead person from the ranks of being a scarecrow. Then why are the 'possessed' to get up from the dead to make their scarecrow hoods to begin with? It's these little details that can make "Husk" a rather frustrating watch.

On the plus side, the film has a pretty solid production. The directing is a bit formulaic with how it goes about things with occasional gem moments of inspiration here and there, but the acting is rather good for a low budget film and the special effects are effective as hell. They use the isolation and fast moving scarecrows to their maximum effect it works on these levels.

"Husk" is a good horror movie that could have been a modern classic. The execution was there on most of the screen elements with decent acting and great special effects. The film even has a pretty original and clever plot. It just doesn't happen to be fleshed out enough to make a lot of sense. Things are left out to rot away in the corn story-wise and other things go by completely left unexplained or poorly developed. It just hurts the film too much in the end, taking it from one level down to the next. For fans of horror though, "Husk" is decent enough for the buy. It has enough of those shining moments to work its magic.

Written By Matt Reifschneider
Posted by DarkReif at 8:18 AM