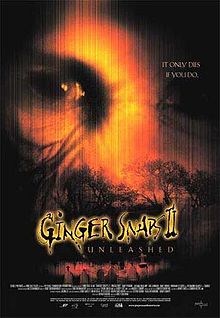 After the cleverly thought through and impressive "Ginger Snaps" with its unique take on the werewolf film, a sequel seemed rather...well, stupid. How do you follow that up? Seemed like a one and done sort of tale. Yet, with its popularity in the underground circles, the all seeing 'they' decided that it needed a couple sequels. "Ginger Snaps 2: Unleashed" and the prequel were filmed back to back. "Ginger Snaps 2" actually comes off as quite a well developed story that continues (and if you haven't seen one then don't bother, its VERY dependent on story arcs from one and never recaps it) the tale of a young girl inflicted with the werewolf curse. Although not quite as good, it does a fine job continuing where we left off.

Brigitte (Perkins) is still dealing with a few heavy things in her life. She killed her own sister Ginger (Isabelle) when she became a werewolf and now her ghost haunts her. Not only that, but she is now dealing with the werewolf affliction. The wolfsbane she injects isn't working any more and to top it off, she finds herself in an institution where they believe her to be a drug addict. The wolf in her is starting to come out though and she has to find a way to get out (with a little help from her new friend Ghost, played by Maslany). Although there seems to be a male werewolf out to find her too.

This movie has a lot going on. If you didn't see "Ginger Snaps" then do so right now before watching this. Otherwise you will be lost like Red Riding Hood in the woods with a lot of wolves looking to hunt you down. In this aspect, the sequel works. It doesn't use time redeveloping Brigitte's character, but takes her on new paths. Paths that add new underlying layers of blooming sexuality, some homosexual undertones, and lots of nuances of family ties, addictions, and blurred realities. These undertones is what made the first one so good and the new subtext is what makes this sequel a worthy one. Once again, the series makes a werewolf film that is only one on the surface and underneath the woolly hair and fangs it's a film about the struggle of human change. It works in spades.

The doesn't quite have the charm that it could have though. Some of the humor is a bit miss (some of it is really clever though) and the plot seems to want to scatter shot across the board. As I mentioned, its a loaded film with meanings and plot twists sometimes to its disadvantage and loss of focus. The film takes a big leap about half way through for change of settings and it doesn't quite flow like it could have through it. It's a logical move but one that doesn't quite fit right and the second half of the film loses a bit of steam until the final act.

"Ginger Snaps 2: Unleashed" was a surprisingly solid film though and a sequel they made work far better then it should have. It's clever continuation of the original sparked many new places for the franchise to go (although it left a lot of questions open like who was this male wolf stalking her?) and its new symbolic subtext made it definitely worthy of its originator. Not quite as a good, but still an enjoyable watch with plenty to go around for multiple viewings. If you loved "Ginger Snaps" then "Unleashed" is a must see.