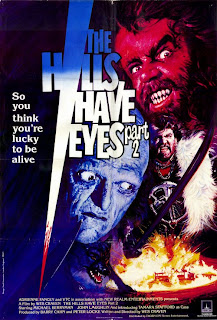 At first glance, all looks great going into this sequel. Wes Craven, director of the original 1977 disturbing classic, returns as both writer and director not to mention he is hot off his smash hit A Nightmare on Elm Street. This sequel is going to be mega badass... right? Right? Oh God Damn it... The Hills Have Eyes Part II just further proves that the creators of the original are just as bad at making ultra shitty sequels as the next guy.

Taking place seven years after the original, we open with one of the survivors talking to a psychologist about the horror he went through. Can anyone cue in the "flashback" theme? Get used to it as this film is loaded with 'em. It seems he has invented a new type of racing fuel but is too shaken up to ride with his motocross team across the desert to premier his new formula. His girlfriend, the surviving cannibal daughter from the original film that turned on her family, decides to travel with the motocross team instead. They end up running late to their race and... duh duh duh.... decide to take a desolate dirt road short cut across the desert. From there, it's all predictable for you to connect the dots as their bus breaks down and they run into a few surviving members of the notorious cannibal family.

The whole time while watching this film you can tell Wes Craven's heart wasn't into the project as the writing and directing is just plain lazy and shoddy. He has the plot take insane turns in order to get our motocross team stranded in the desert. In order to have the team to be running late, Craven haphazardly writes in that they all forgot about daylight savings time... I shit you not. Then, of course, their bus conveniently springs a fuel leak. Come on Craven... you can do way better than this!


The characters are all unlikeable and make incredibly insane decisions. The whole first half of the film they are whining about having to get to the race on time as it's like a "matter of life and death." When their bus springs a leak they no longer seem concerned getting to the race on time and take their sweet ass time searching a decapitated cabin for fuel. After one of their group members gets attacked by a creepo and knowing damn well this is the same area that was the stomping grounds to cannibal families, our two male "heroes" head out to capture the goon (who just happens to know how to ride a motorcycle... how the fuck did he learn that?) and even seem to be enjoying themselves and taunt the bastards after they were almost killed. Hell, Craven seems to be willing to throw anything into the plot to make things a little more "interesting" including a blind woman to make the climax a little more exciting. All this is bad, but Craven hits the ultimate low when he gives the dog (who also survived the original) a god damn flashback sequence. Yes, you read that right.

I know what you're thinking... at least Michael Berryman is back playing Pluto, one of the surviving members of the cannibal family that obviously died in the original but was only brought back in order to adorn the poster artwork again. Even his character sucks... trust me.

This is one of the most embarrassing films Wes Craven has on his resume and it's no surprise he never talks about it. How the hell could the guy that was hot off the heels of A Nightmare on Elm Street direct this horrible drek? My guess is that it was solely for the money as he put no effort into the writing or directing and loads the film up with awful dialogue, insane character decisions and stock footage of the original film for padding. The most memorable element that this unmemorable sequel has to offer is the god damn dog flashback, and that is only for the unintentional laugh factor. How sad of a statement is that? 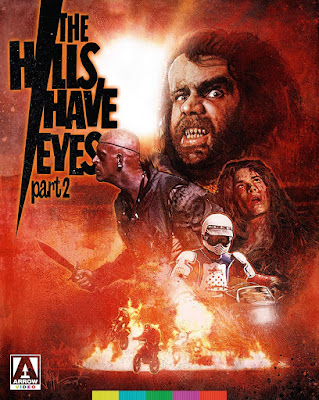 As Eric eloquently put it, The Hills Have Eyes Part II is known as an embarrassing flick for Craven. It's notoriously known for the massive production issues, reportedly only having two-thirds of the film shot before funding was pulled and Craven having to manipulate the already shot footage and include the various flashbacks to provide padding, not to mention Craven has gone on the record to say that he only filmed the movie for monetary purposes before disowning it regularly. When the director/writer disowns the film along with many of its other creative components, you know that the film has major issues.

However, time has been relatively kind to The Hills Have Eyes Part II. While it still retains the reputation as being one of the most disappointing horror sequels, there has been something of a reclamation of the film by cult fans. Along with a new appreciation for the career of Craven after his passing four years ago, there has been something of a resurgence in people that defend the film. To those that defend it, the main core idea about bringing Ruby (played by the same actress from the original) back is rather inspired and there are some fun and goofy set-pieces that are more memorable for being silly than great. The rest of the film is, as Eric mentioned above, something of a wash in poor narrative, inconsistent character work, and cheap scares.


Now, the reason for the update on this review is that Arrow Video is putting out a deluxe new Blu Ray of the film (on September 24th, 2019 in the US). This is one of those releases that addresses that new cult following for it along with delivering a beautiful set to match their fantastic release of Craven's first film. The film itself gets a fantastic 2K restoration, it gets a wonderful new documentary about the making of the film (which goes fairly in-depth about the production issues and interviews a ton of the people involved with the film), and a really great new commentary by The Hysteria Continues. The physical set itself is the best part though, with the beautiful new artwork, a poster, postcards, and a new booklet of writing. For those looking to complete their Wes Craven collection or those who do enjoy the film to some degree, this Arrow Video release is easily worth adding to the shelf. It's just a shame the film itself doesn't match the quality of the release.

RATING FOR THE BLU RAY RELEASE:

Written By Matt Reifschneider
Posted by Cronosmantas at 7:58 PM