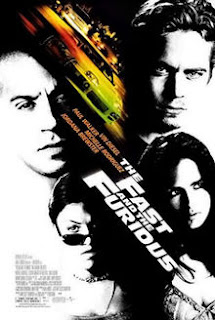 When I first saw "The Fast And The Furious" in theaters a decade ago, I hated it. I wanted an action film with car stunts galore and wrecks left and right. What I got was a pseudo-serious cop drama based in the world of street racing. Not particularly the same thing. Now with the fifth entry on the horizon, it was time that I revisited this film knowing full well what it was. Was it better then I remember? Yes, but unfortunately its a film that rarely sparks enough chemistry for a franchise.

Brian (Walker) is desperate to get into the same ring as the street legend Dom (Diesel) and the underground world of street racing. Partially, because Dom is a legend of ferocity and calm collected victory and partially because Brian is an undercover cop looking to bust a ring of on the fly truck thefts. Brian thinks that Dom and his crew would know the perpetrators with his high standing, but how far is he willing to tumble into this addictive world before the lines between justice and loyalty begin to blur?

"The Fast And The Furious" is a film that wants so desperately to be a film regarded for its well built story and great characters, but is so awfully wrapped in mainstream fluff that it is torn through its entire play time. It tries very hard. At its heart, it is a good movie. It has a solid cop drama that could have really delved into an emotional depth of a man torn between two worlds. Unfortunately (more or less thanks to director Rob Cohen), it focuses on all the wrong details. It has its moments where the film hits its strides with the companionship and good acting, but they seem fleeting and the film moves at lightning speeds to get to the next 'sweet street car race'.

Believe it or not, the casting is pretty solid here. Walker holds his own (if one is willing to look beyond his pretty boy image) with the ensemble, but its Vin Diesel that steals this film. Despite his modern action star niche that he has fallen into, he has an onscreen chemistry that rises above his only partially good acting. This is one of the saving graces for this film and its easy to see why his stock rose quickly after this film.

Caught between two worlds, one of crime drama and one of glitzy fast cars and crappy action sequences, "The Fast And The Furious" is a film that could have been really good, but falls prey to Cohen's penchant for poor balances between the two. This second time around, I really did want to like the film, but it still doesn't do it for me. It works at times when the focus is there and Diesel's presence definitely lifts it by a rating. Too bad it just can't quite flow like the cars it showcases.

BONUS RANT: What is with the Speed Racer influenced first race sequence? With the blurring back ground colors and the audio fuzz of sound, I thought I was watching a live action anime for a few minutes. It sat poorly with me and still lingers at a concept that failed to work in the confines of the film.

Written By Matt Reifschneider
Posted by DarkReif at 11:45 PM