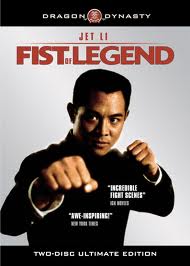 Jet Li may not have had quite the US commercial success that Jackie Chan had, but some of his films were just as damn good (just perhaps not his American ones). Included in this list of great Jet Li vehicles is the rather epic "Fist Of Legend", a re-working of the Bruce Lee classic "The Chinese Connection" aka "Fist Of Fury". Although the original is highly considered a classic, this reinvention of the film is actually a step forward with the story and it makes for a slightly better film. Not to mention it has a lot of kicking ass courtesy of Jet Li.

Chen Zhen (Li) has been sent from his training in kung fu to attend school in Japan. Although the tensions between the Japanese and Chinese are only heating up, his return home comes at the news of his master's passing. He returns home to the Shanghai International Settlement (in 1937 during the Second Sino-Japanese War as the city is occupied by Japanese forces) and uncovers that his master was beaten by a rival Japanese school in the city. He begins to uncover a larger mystery when he finds out his master was poisoned before the match. This leads Chen Zhen to start a battle between the schools to avenge his master's death, but will his actions only push a war on the brink closer to ignition?

What "Fist Of Legend" truly inspires with is that not only is it a great kung fu movie with amazing choreography (done by a legend himself Yuen-Woo Ping), but its also a rather deep and spirited look at racial tensions between the Chinese and Japanese in a specific historical setting. By throwing in little twists and turns into the original plot like Zhen being in Japan to come home and being in love with a Japanese girl who comes over to be with him, the overall depth and meaning to a rather basic kung fu tale is heightened and strengthened. To add to it, the acting is pretty solid and in the Dragon Dynasty version here in the US we actually get the original audio track (although the subtitles do change the meaning of the film a bit in this version that I don't appreciate) which improves how its told. "First Of Legend" certainly improves on this aspect nicely.

It must also be mentioned that the choreography is stunning for this film. Yuen-Woo Ping lights it up and uses the great cast and stunt work to his advantage. This is one of my favorite films he has done due to its more realistic style (no flying people finally!). He does occasionally go a bit over board with it and I would have liked to see it even more realistic with some of the more outrageous moves. Li works it well though and brings that great forceful Bruce Lee vibe to the film and it works in spades here. There is even a bad ass throw down with the two combatants blind folded. HUZZAH! Yuen-Woo Ping certainly has this down to a science.

This Dragon Dynasty version of the film does have some flaws to it. As I mentioned, some of the subtitling is changed to a lesser effect (particularly the final shot of the film which has the dialogue completely changed) and the opening and ending credits blow hard core. Particularly with its title sequence with its horrendous title card. Yipes!

"Fist Of Legend" is quite an impressive film though. The US release is flawed, but the film itself surpasses most of it with a great story and even better fight sequences. This is a kung fu classic and one of Jet Li's highlights for a rather well rounded career.

Written By Matt Reifschneider
Posted by DarkReif at 6:17 PM