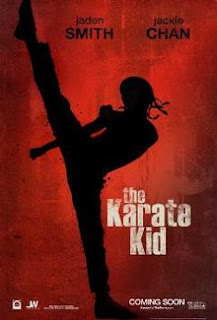 If you grew up in the 80s, the original "Karate Kid" was a staple of life. If it wasn't then you were surely deprived of its cheesy glory and heartwarming story. To remake such a film, would require a certain ability to modernize the tale without losing the underlying messages and cliches that made it a classic. To an extent, the 2010 version of "The Karate Kid" does just that. Although it takes its own path with the story (basing it in China this time around) it still retains many of the heartwarming family film aspects that it needed. Unfortunately, it's still quite a flawed film in its portrayal.

Dre (Smith) and his mother have had to make some major changes in their life. Like, you know, moving to China for a job opportunity. Despite his charm, Dre has found adjusting a bit harder than expected. No one understands him and a bully at school, trained in kung fu as one would have it, repeatedly beats him down. When a local maintenance man Mr. Han (Chan) comes to his aid one day, both of these outcasts find themselves dealing with a rather malicious teach of kung fu at the local facility. Now it's up to Han to teach Dre the real meaning and use of kung fu so that he can compete in an open tournament.

Oh yeah, "The Karate Kid" is still really damn cheesy. It lacks some of that ridiculous 80s charm, much to its disadvantage, and it comes off as far too melodramatic far too often. It plays the emotions up to 11 on the emotion amp and for a film well over 2 hours it tends to build up this Lifetime channel cheese that it can't overcome. The melodrama can be a little much and it makes the film drag a bit in its longer moments. This is the film's biggest obstacle that it struggles with.

Besides that - and some very American style fight sequences towards the end that are over edited and under displayed - "The Karate Kid" isn't half bad. The acting is pretty solid, proving with a subtle role that Jackie Chan can hold his own even in an English language film acting wise, and the directing really utilizes the land scape of China to awe the audience with its sights. They definitely make it seem very majestic with its heart of gold.

I was pleasantly surprised with "The Karate Kid". It was relatively inspiring with its modernization of the story and its unique flavors to distinguish itself, but it tends to fall under its own over the top drama. I wish that some of the film would have held more Eastern style to its approach technically (the fight scenes could have used a director who knows how to handle them), but overall the film works. It definitely could have been worse. That's for sure.

BONUS RANT: Is it just me or does little Smith act just like his father, Will Smith? There are times and lines with his street talk and attitude that it was very apparent whose offspring it was. It was just a little creepy.