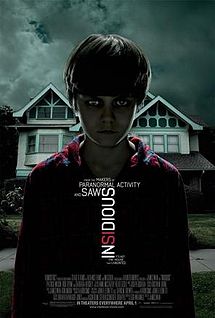 As a James Wan fan, it was only the good fan in me to see "Insidious". As a masochist, it was only right that I see it in a completely empty and very dark theater. I've seen my fair share of scary movies. Movies that seem to scare the living daylights out of others (cough "Paranormal Activity" cough), rarely rattle my bones, but I'll be damned if "Insidious" doesn't lay on the scare tactics so wickedly fine that even I was shaky a few times. By shaky I mean I actually cursed out loud at a few moments. Luckily, I was by myself. That, in essence, is what makes "Insidious" a horror fan must watch. Despite some odd twists in writing, this film is out to scare you. And it does it. Way too well.

Renai (Byrne) and Josh (Wilson) are making it work. They have two young boys and a new baby girl and a new house that they just moved into. Something's wrong though. The house feels wrong. The air is too still. The bumps in the night too loud. When their oldest son, Dalton (Simpkins), suddenly lapses into a coma all of their fears as parents seem to come true. And the ghostly figures and odd occurrences are only getting worse and worse. How can a parent protect their family with a son unable to respond to sense and no knowledge of a world not of our own?

The makers of "Saw", that being Leigh Whannell (whom writes and supporting acts in this one) and James Wan (whom directs this one), strike another horrific film. With their running resume being so damn strong, its becoming clear that they are setting the new standards with modern horror. Add 'haunted house film' to their successes now. "Insidious" rocks and rolls with some of the best each of these men can do and its a hell of a ride to watch.

Wan's visual flair for combining the disturbingly subtle and sheer force takes the basic haunted house tale and flips it on its head. All of his now common traits are here: amazing use of light to give use high contrast of dark and light, wicked clever camera shots including one from above a ceiling fan that sparks with Raimi influence, and a palpable tension that he pours on like cement with atmosphere that's heavy enough to drown the most nerve hardened veterans. We only saw glimpses of this style in the underrated "Dead Silence", but here its in full force. With only a PG-13 rating, it's pretty fucking stellar that he pulls off one of the scariest films I've seen in a long time. It shows his talent in full bloom.

Despite the praise I have given it thus far though, "Insidious" is not a perfect film. Far from it, in fact. The first half of this film completely blows one's socks off with how intense it is and how it works that haunted house vibe. Had the film just kept with this it would be a 5 instead of a 4. Unfortunately, it wants to crumble a bit in the second half as it tries to give explanation and a few twists to the plot. Although Wan and Whannell seemingly make it work, it doesn't quite hold under its weight like the first half did. I certainly thought that the astral projection aspect was a bit out of left field and the film seems to think so too. "Insidious" almost takes a rather fantasy turn here as they explore a few new paths. I applaud them for creativity, but it just doesn't blend quite like it should. It works, but rarely blows it out of the water like the first half.

Even though it does tend to want to fall apart at the end, "Insidious" manages to get in quite a few solid scares and a tension that way too many horror films have forgotten existed. Wan is always on top of his game and its his part in this film that truly sets it above and beyond. Without his visual flair and key sense of what makes a good horror film good (like that killer score!), this might have been just an okay film. A definite must see for horror fans and a dare to watch it late at night with no lights by yourself.

Written By Matt Reifschneider
Posted by DarkReif at 5:12 PM