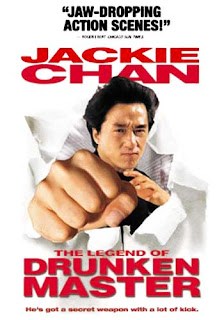 Jackie Chan's return to the "Drunken Master" franchise after the 1978 original is a left/right combo of awesome proportions. "The Legend Of Drunken Master" (as its titled in the US, else where it is known as "Drunken Master II") is an essential perfect combination of all things that make Jackie Chan films great. The stunt work and choreographed fights are stunningly well crafted, the comedic bits utilize his slap stick and often goofy routine to a 'T', and the film even underlines it all with some nice moral and political issues. "The Legend Of Drunken Master" is a knock-out of kung fu flying style.

Wong (Chan) tries his best. He really does. His father, a wealthy master of martial arts and the doctor in the village, has always been there to guide his son's fist-first ways. When an incident involving some lost ginseng gets Wong involved with some British backed thugs, he finds himself struggling with how to approach the situation. His amazing talent with fighting (particularly at drunken boxing) seems the ideal solution, but his father forbids its use. Does violence sometimes solve the larger issues?

What makes "The Legend Of Drunken Master" such an instant classic when it comes to kung fu films is the relentless, but not pointless, flow from story to fight. It has a legit story to its background pointing out the tension between the British and Chinese when it came to culture shock, which rarely takes away from its extensive fight sequences. Although at times the film seemingly goes a bit too far into serious territory (when Chan's father character beats him for example), it rarely deviates from its established running pace and it makes for a fantastic watch.

Of course, as with all of Chan's films, the fight sequences are jaw dropping in their speed, complexity, and flow. His quick switches from standard martial arts into drunken boxing as he battles a slew of friends and enemies is stunning. The settings are perfect for the fights too, occurring under trains, in two layer bars, on the street, and an epic finale in a steel mill. The fighting is ridiculously well done and choreographed to use Chan's skills perfectly. Just for this, "The Legend Of Drunken Master" is a must own for any fan of martial arts, period.

Very little of this film is flawed. Occasionally the humor is a miss (perhaps its just my misunderstanding of Chinese culture at the time) and the ending leaves a little to be desired with its sudden cut off, but otherwise this film rocks it from minute one. I'm still waiting for an original language audio version of the film, one that isn't dubbed, to get released without an illegal bootleg, but as is - this is still a must own.

Written By Matt Reifschneider
Posted by DarkReif at 9:29 PM