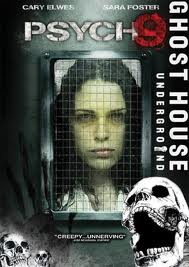 "Psych: 9" wound up on the old reviewing queue thanks to Ghost House Underground and their fairly solid selection of great underground genre films. Unfortunately, after the rather bad taste that was left in my mouth after "Stag Night", I was hoping that this one would pull off the surprise brilliance that films like "The Children" had done for the catalog. WRONG! Turns out, "Psych: 9" is a little creepy atmosphere driven flick that seemingly tries to fool its viewers repeatedly with vagueness and random plot twists not knowning that we just don't give two shits to begin with. It's hard to suck in an audience that's too confused to be fooled with half assed trickery.

Roslyn (Foster) may not have the best job, but its a damn job, right? Working overnights filing away records for the emergency room for a recently shut down hospital (that looks like its been shut down for 20 years), Roslyn begins to suspect that something sinister is going down in this piece of crap ex-hospital. With the help of the psych doctor on fifth floor (Elwes), a detective (Biehn), and her seemingly suspicious husband (Mann) she begins to uncover secrets about herself and the hospital as its linked to a spree of murders happening around the area. Ooooooo! Scary!

Using techniques similar to that of a vastly superior "The Broken", "Psych: 9" very much lathers on the atmosphere and 'less is more' dialogue to create a film that generally needs to be felt rather than followed. In this aspect, it does succeed with some solid performances from the main players of the cast (which are not helped in many circumstances by their dialogue) and a relatively good use of the setting and artistic design. Although I did mention that at times it can be over kill (the hospital looks like its been abandoned for a decade let along just closed), it works to build that feel that "Psych: 9" desperately claws at to obtain.

On the other hand, this film pretty much fails to use the atmosphere properly. Stuck in a weird purgatorial state between being a sort of half assed ghost film, a personal nightmare drama, and a serial killer slasher film, "Psych: 9" fails to be any of the above let alone a combination of the three. With its rather lazy pace, that seriously had me exhausted with lack of progress by a half hour in, and far too complex for its own good plot line, this film simply is too simple and over ambitious for itself. The weaving plot lines are not explained well enough to truly weave together. We get a story that sort of leaps paths to each plot as it goes rather than letting them come together in a natural way and its frustrating as all hell. Is this a game of fucking "Clue" or are we supposed to watch our lead fall apart from ghostly memories? The film tries to juggle both and ends up dropping all its balls.

There are quite a few aspects to "Psych: 9" that do peak interest, but the film fails to really justify its choices with how it approaches itself. This un-motivates the audience (i.e. me) and makes for such a boring watch that by the time its rather confusing and completely bat shit stupid climax approaches no one gives a damn. This is why "Psych: 9" is just a rather long waste of a horror viewing experience.

BONUS RANT: And what the fuck happened to the serial killer story? As the credits began to roll, that's all I could think about. Did it seriously end with Biehn's pseudo-funny line about burning the records? COP OUT!