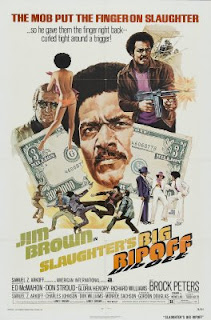 I always felt sorry for Slaughter as he gets a "Big Rip-off" in his sequel title as opposed to Shaft who gets a "Big Score". What gives.... Shaft gets a piece of ass and Slaughter gets pulled a fast one on? In my humble opinion Slaughter is more badass than Shaft and if anyone deserves a great score, it's fuckin' Slaughter but don't fret as he does get plenty of ass, both black and white, in this entertaining follow-up to 1972 Blaxploitation hit "Slaughter."

"Slaughter's Big Rip-off" opens with a sequence one would least expect for this sequel open with... with Slaughter in cowboy drag in a horse race. Really... what the fuck? Where is my badass title sequence? Oh well but soon after a hitman flying an airplane attempts a hit on Slaughter who in turn misses and kills a few of Slaughter's friends instead. He heads out for vengeance but like the original, pisses off some law enforcement along the way and they give him make a deal to get them a ledger of names of corrupt police and political figures (hmmm... sounds like "Black Caesar" to me) in turn for Slaughter not going to prison. Plenty of bullets break the skin of mafia goons as a result.

Jim Brown seems much more comfortable in the title role this second time around as he makes the character even more badass. We get more hand to hand combat from the character and even some badass one liners (my favorite is "how would you like to pick your teeth out of your lips). He also seems to get much more ass in this film making him a blaxploitation rival for James Bond. In all the character of Slaughter is even more baddass in this sequel minus the awkward opening with him in western garb.

In an awkward casting moment the filmmakers hired Ed McMahon for the lead villain. For you youngins out there he was the sidekick for Johnny Carson on "The Tonight Show" who mummered the famous line "Heerrree's Johnny" long before the likes of Jack Nicolson. I actually never knew Ed McMahon was an actual actor before his TV stints and actually he isn't terrible but I did have a hard time shacking his "Tonight Show" motif from my mind.

The plot however is rather haphazardly constructed making the film drag at some moments between the entertaining action sequences. Director Gordon Douglas does what he can with the script but the film sadly misses original director Jack Starrett who wonderfully directed the action sequences to wrap around its plot issues. Starrett was unavailable to direct as he hightailed it to Warner Brothers to make his film "Cleopatra Jones" and in turn pissing off AIP executive Samuel Z. Arkoff who responded with his own woman Blaxploitation revenge effort "Coffy" which itself is a completely different story.

The two things that annoy me the most is first how our evil hitman attempts to kill Slaughter. He makes Slaughter's main squeeze drive him off a cliff and then leaves within a few minutes before making sure Slaughter is truly dead. If I learned anything from "Under Seige 2" it's that "assumption is the mother of all fuck-ups" and this James Bond villain mistake annoyed the shit out of me. Second is how all newer versions of the film are emasculated of James Brown's wonderful original score. Damn I hate when soundtracks and score rights deteriorate for whatever reason over the years resulting with some films, like "Slaughter's Big Rip-off", having a replacement score haphazardly spliced in. Grr...

"Slaughter's Big Rip-off" isn't as good as the original due to a poorly constructed plot and the lack of original director Jack Starrett but Jim Brown seems more comfortable in the role making Slaughter even more badass in the long run. The film is left open for another sequel but sadly a third film to round out a trilogy never emerged.

Written By Eric Reifschneider
Posted by Cronosmantas at 11:26 AM