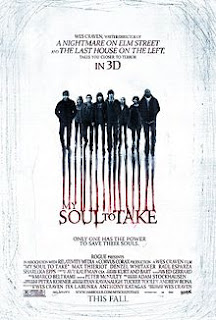 Ouch. I mean, Wes Craven hasn't been near the top of his game for quite some time, but seriously? "My Soul To Take" comes off as an odd combination of two of Craven's biggest films, "Scream" and "A Nightmare On Elm Street", by balling them up into a smashed film of cliches. It's not near as clever as the previously mentioned films and despite some legitly interesting ideas that are presented along the way, "My Soul To Take" collapses under its own ill established schemes. One more notch on Craven's 'fail list'.

Bug (Thieriot) seems to live in your normal small town...except for the fact that 16 years earlier a schizophrenic serial killer called The Ripper (how original!) disappeared after an ambulance wrecked. Now seven children whom were born on the day he died, are out to celebrate his unique infamy. Unfortunately, they are seemingly being knocked off one by one. Rumor has it that The Ripper's soul had infected one of the youths and is just dying to spread a little blood again. Can Bug stop the "new" killer before they are all slashed? Or is he the killer?

Blah, blah, blah. Seen it all before. Hell, I've seen Craven do basically the same thing 30 years ago. High school kids have to find out about a supposed serial killer coming back from the grave to kill them? Hm. Where have I heard that one before? Expect this time he tries to mix it with a bit of 'whodunnit' mystery (along the lines of another one of his better films) with lots of red herrings and random occurrences to give the film a bit more of a supernatural twist. In all honesty, it pretty much bored me. The actors were all stale in their roles with only a few of them being able to intrigue me into caring about them (Bug's sister was the big one that actually sparked my curiosity only to be let down with lacking screen time or exposition) and the horror elements were underplayed by run of the mill slasher moments that failed to thrill. Why he didn't play up more of the tension and the stalking side of the film is beyond me. It would have made for a more intense film.

What makes this film feel even worse is that there are moments, oh yes, where it doesn't suck like a knock off of his previous works. The underlying symbolism of the condor and crow for the two leads for example. It's a great little detail that is beaten into your skull with blunt "the audience is too stupid to get it!" force and never properly expanded on in bigger realms. If you are going to put it in there...USE IT! We also get this interesting idea of the multiple souls of certain individuals and how it dictates to the seven kids. We get some really corny scenes with multi-voiced personality flipping, but its left out to die in the woods like half the kids in the film. RUN WITH IT! DON'T TEASE ME YOU BASTARD!

Despite some great ideas that are tucked away in "My Soul To Take", one can chalk this one up as one more reason that Craven has lost his touch. For a director/writer that can take horror in new directions with his films, "My Soul To Take" is bottom of the barrel when it comes to creativity and execution. What happened to the guy who's previous writing/directing film was the unique and very smart "New Nightmare"?!

BONUS RANT: What the hell is with the end credits? Do I want to see comic book animations of condors? Not particularly. Not since you didn't use the concept to its potential in the film. Don't remind me of that misfire.

Written By Matt Reifschneider
Posted by DarkReif at 10:25 PM