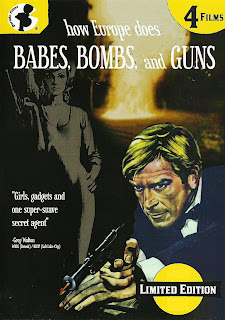 "Electra One" (sometimes spelled "Electra 1" and also known as "With Death on Your Back") is one of the most rare films I've reviewed here on Blood Brothers. Why? Well it's because this insanely obscure 1967 Euro Spy film only got a very limited VHS release in a small number of countries and the DVD release here in America is part of a very limited DVD set (limited to 250 units) called "How Europe Does Babes, Bombs and Guns" and is packaged alongside the "Agent 077" trilogy. Yes... only 250 DVDs of this is in existence in the world so this is one fucking rare film. Well rare films are usually rare for a reason as they fall into the bracket of "not very fucking good and deserves to be forgotten." Is "Electra One" one of these such films? Well I can honestly say NO.

Some terrorists are up to no good in the swinging 60s as they have developed a gas that can make anyone do what they wish, like have a high ranking military commander go bonkers and push a button to launch missiles. America and Russia not surprisingly flip out over this new gas and the two countries join together in order to develop a cure and to capture the terrorists involved. In comes George Martin to throw a kink into the system as he is a master jewel thief that steals a brief case containing the antidote (stated early on in the film that it is the only vile as there was no time to make more... dumbasses). He sells it for cash but then gets involved in a multi-national scheme and now he has to clear his name and do the good dead of saving the world.

Unlike other Euro Spy films I have seen which are mostly Italian made, this little hidden gem is actually a Spanish Euro Spy film despite starring George Martin, an actor mostly known for his Italian pictures in the Spaghetti Western genre. Martin is loveable in the role as the James Bond-esque jewel thief as he portrays the character with a likeable cockiness and charm. I will say it is interesting making the main character a thief as opposed to a secret agent like most of these European knock-off films do.

Director Alfonso Balcázar loads the film up with plenty of action and humor. We get gun fights, foot chases, airplane chases and one hell-of-a car chase. The airplane chase towards the end also is highly reminiscent of the helicopter chase at the climax of the fantastic James Bond picture "From Russia with Love." His humor is also well placed without overbearing the story. My personal favorite humor touches include the banter between the United States and Russian secret services which include playful ways to kill each other.

The plot can get a little silly at times especially as its main plot surrounds a gas that, according to a character, makes people "do actions they normally wouldn't do." What?! At the beginning of the film they wanted to use the gas to cause a military commander to hit a button to launch some missiles and he almost succeeds. How the fuck did they know the gas would make him do that exact action? Can they fine tune the gas to make people do whatever action they want, like make a person take a dump in the middle of the floor? This is a ridiculous plot device but I'll role with it for a fun loving 60s spy romp.

For a low budget Euro Spy film I found this insanely entertaining. Great.. hell no but a lot of fun. It's got enough action, humor and eye candy to keep any fan of 60s Euro Spy entertained. As good as a James Bond film from the era? Well no but one shouldn't expect it to be. For what it is "Electra One" is sure to entertain.

Written By Eric Reifschneider
Posted by Cronosmantas at 11:23 PM