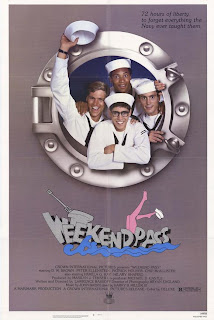 Crown International sure released some real comedy turds throughout the 80s with "Weekend Pass" floating to the near the top. "Weekend Pass" really could be a synonym entry for "boring" and could qualify for cinematic Chinese water torture. Yes... it's that fucking bad.

The plot (what plot?) has four teenagers fresh out of Navy basic training hitting the town of L.A. on their weekend pass and through trial and tribulation to get laid, they end up finding love. Really... that's about fucking it.

As you can tell from my very brief description paragraph that there is no damn plot to this movie. Get ready for a lot of montages of various signs and locations in L.A. flying by with shit, filler dialogue about our four guys jibber jabbering about pointless topics such as neon signs. Yea... sounds like a wonderful time.

Our guys hit a strip club for the first 15 minutes of the film and only director Lawrence Bassoff could make a strip club scene with some nice racks seem so trite. Later they visit the beeeeaaach... sorry... I was dozing off... and end up joining a fitness class in order for one of our blockheads to ask the instructor out. Out of the other three one wants to hits a stand-up comedian club (run by a young Phil Hartman no less!) to test out his comedy skills, one has a blind date with his colonel's daughter and the other wants to hook with an old girlfriend to get a quick lay. Get ready to down some Mountain Dews as you're going to need to be high on caffeine to make it through this cinematic equivalent to watching grass grow.

Out cast is made up of no-body's that can't act and the dialogue sounds like their talking with a mouthful of marbles. The bad acting, shit dialogue, dragging "plot", and unenthusiastic directing makes this a very, very trying movie experience. To top it off we get a couple of god awful 80s pop tunes that continuously play throughout the film with the title song making me wish for Lionel Richie's Dancing on the Ceiling you quall my eardrums from bleeding.

The Crown International symbol before a comedy picture should be a warning to anyone looking for an actual fun time. Like "Weekend Pass", you enter at your own risk as you're boarding a sinking ship. For me Crown International's weekend pass has expired permanently. Speaking of Crown International, a background character in the film is even wearing a damn T-Shirt with their symbol. Nothing like advertising that their proud of the shit that their film factory crapped out at an incredible rate during the 80s.