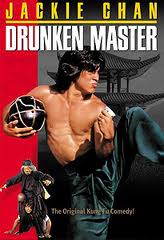 Kung fu movies have always been favorites of mine, but the original 1978 "Drunken Master" with Jackie Chan is a real gem. It's still a classic kung fu movie in all the right ways, but this film is truly created by the blooming careers of two men: star Jackie Chan and director Yuen-Woo Ping, whose combined over the top style sparks with ingenuity and significant amounts of fun. Combined with the killer choreography that combines traditional martial art styles and the hard as hell to master 'drunken boxing', "Drunken Master" is everything one needs in a fun martial arts flick.

Wong Fei Hung (Chan) is a mischievous son of a very high standing martial arts teacher. His antics repeatedly get him into trouble and his fight-first ways have earned him the distaste of his father. When he gets into a fight with both his aunt and a wealthy stranger in one day, his father decides it is time for him to learn from his eclectic uncle. For one year he trains in the style of drunken boxing to learn lessons on how to act and what dedication is. When an assassin comes for his father, his skills will be put to the test though. Did Wong learn enough from his trials to save the one person who put him through them?

The only thing that's missing from "Drunken Master" is a deeper story. Although its story is good enough to get us where we need to be with plot and pacing, this film could have done with a bit more emotional depth for its tale. As is, it works for the martial arts/comedy style, but I could have used a bit more here.

Other than that, "Drunken Master" is spectacular. From its initial fight sequence to set up the 'villain' of the story to the final (very well choreographed) extensive fight sequence between the assassin and Wong, this film is so enjoyable and fun to watch, it breezes by so quickly one wants to restart it just to keep watching. Jackie Chan really does the comedic element well with his "Three Stooge"-esque slapstick and his physical martial arts is ridiculously impressive. To see the things he does in this film, with all of the charm he can muster, is jaw dropping. Along with some well timed plot pacing and endless fight sequences (wanna have a fight over paying for dinner? Why the hell not?) and some well crafted directing, although his focus shots can be a bit shoddy, this film is a kung fu fan's dream.

I could go on and on about its awesome fights and comedic elements that work, but one is best off seeing it for themselves. It's so much fun and so impressive choreography wise, the lack of legit story seems easily brushed aside for better things. Something few films can do easily. One of the best out there.