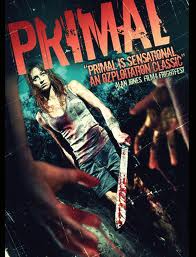 Despite some valiant efforts to obtain some modern horror greatness in line with "The Descent" or "The Ruins", this Australian 'fucked up nature' horror flick comes off as a bit confusing and rather silly. It has some great moments and the execution of the horror aspects is high (including some very creepy gore sequences), but the charm and great moments don't cover up the gaping plot holes and conveniences of its story to save it. "Primal" becomes a rather mediocre film in the fluster to make memorable scenes and take a clever horror concept to the 'real world'.

A group of young people (how many horror synopsis' start off this way?) take a trip out of their element (and continue this way?) into the wilderness to look for some cave paintings that have been forgotten for generations. What they find on the side of this mountain is not necessarily what they were looking for as one of their members starts showing signs of odd physical developments and aggressive behavior. Is it simply something in the water making them paranoid, or is there something out there in the wilderness willing to go primal on their city asses?

The film has a very slick look to it. In very modern style, the director and writer (Reed) embrace the classic horror ideologies (isolation against a terrifying force greater than understanding) and persue it in modern amounts of gore and frantic camera work. This gives the film a high polish look, sans some oddly placed CGI work that is a complete miss, and largely uses the style to its benefit. The acting is well versed despite its rather cliche group of characters and the first half of this movie really uses the setting and tension to its benefit. I was stoked with how "Primal" was shaping up to be. It could make it up there with "The Descent"!

Then it gets weird.

The second half of the film moves from its almost zombie-film like approach of build and horror elements and moves straight into 'survivalist 101' as our group of survivors battles against their own logic and down into a spiral of unexplained elements and random plot twists. The final act takes a rather Lovecraftian style to itself (without much of a build towards it and lacking the atmosphere needed to pull it off) and the film quickly falls apart. What happened to the good character work? What happened to the damn logic? The characters seem completely unrealistic at this point, including the frustratingly idiotic character Chad and his weird jumps of loyalties, and the film just becomes a whirlwind of gore and silly writing. This leaves the film to end on a completely silly finale of poor CGI and senseless explanation for the events that occurred earlier.

"Primal" starts off in the right direction, giving us a simple but well executed story that tries to out smart itself by the end and becomes a cluster of poorly crafted 'unexplained' phenomenon. Although the look of the film and its special effects are quite the thing to watch, the film just falls apart half way through and ceases to be at all the realistic horror experience it could have been. The potential for a great film was buried there, but "Primal" rarely comes out of the darkness long enough to grasp it.

Written By Matt Reifschneider
Posted by DarkReif at 12:03 AM