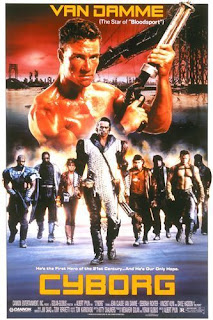 "Cyborg" holds a special place in this reviewer's black mechanized heart as it was the final film under the Cannon Films logo to be produced by both Yoram Globus and Menahem Golan. Yes the almighty chain of Golan and Globus would be broken after this film as each would go their separate ways but Cannon forged on with "Cyborg" being an insanely awful, yet entertaining platter of cheese that could only be served by the Hawaiian mastro of cheese himself, director Albert Pyun.

Jean Claude Van Damme kicks ass through a post apocalyptic landscape. He saves the life of a cyborg (for you non-tech buffs that is a half human, half robot organism) who holds the cure for a plague sweeping the world. Damme agrees to escort the cyborg to her destination but it won't be easy as she is being followed by a sadistic gang of thugs lead by the very guy that killed Damme's family. Sounds like there's going to be a throw down by the end to me!

Director Albert Pyun's hard on for post apoc movies with cyborgs begins here as I'm not shitting you he directed a shit ton later such as "Nemesis", "Nemesis 2", "Nemesis 3", "Nemesis 4" , "Omega Doom" among many others but none of them would match the sure entertainment value he displays with "Cyborg". Cult fanatics know he's a hack director but at least he loads the film up with plenty of action to keep our primordial brains entertained and ignoring the insanely simple plot. We also get plenty of chase sequences and slow motion kicks to keep us fans of no brain action grinning.

Damme is his usual self here playing a hardened survivor bitter at the very world due to the fact his family fell victim to the hell raining upon the human race... much like, what's his name... oh yea, MAD MAX! To counterbalance Damme's short nature Pyan cast a rather tall individual with piercing blue eyes named Vincent Klyn. Pyun apparently discovered this guy in Hawaii as he was a professional surfer. A surfer... yea sounds like a great idea to cast him as a villain in a MARTIAL ARTS POST APOCALYPIC film! As expected this guy can't fight worth a shit so we get Van Damme kicking the crap out of him while he growls and howls. Hell the writers even threw in a poorly developed love interest in a drifter that has the hots for Van Damme.

Not surprisingly "Cyborg" is a braindead post apocalyptic action flick that still manages to bring a smile to my face in its sheer ineptitude that only Albert Pyun would be so able to craft. Hell he even has the balls to throw in Christian references with Damme at one point being crucified but then again I'm sure I'm looking too deep into the allegorical meanings within "Cyborg." What can I say... I enjoyed it. Am I ashamed to say so? You bet but tough guys beating the shit out of each other in a post apocalyptic world with cyborgs thrown in the mix is enough ingredients for me to enjoy in a B-movie. "Cyborg" did get followed by two sequels in the 1990's, two of which Pyun surprisingly wouldn't return to direct.

Written By Eric Reifschneider
Posted by Cronosmantas at 10:13 PM