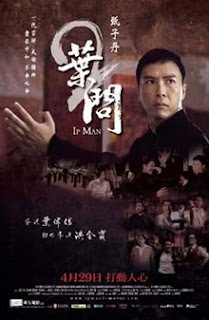 With the critical and commercial success of "Ip Man" (its also easily the most read review on this site), the eventual "Ip Man 2", which is subtitled on the box here as "Legend Of The Grandmaster", was going to have some big shoes to fill, which it handedly does. Essentially, it takes all the aspects of "Ip Man" and tightens it all up and builds on it. The drama is more dramatic. The fights more intense and spectacular. The history a bit less over the top (it still is) but a potent part of the setting. This makes "Ip Man 2" a better film all around while never losing what made the original so great.

Ip Man (Yen) and his wife and child are now living in Hong Kong since fleeing his home town from the Japanese. It's now the early 50s and Ip Man and his family are struggling to make ends meet. He has opened up a school for Wing Chun, but it doesn't flourish. When he does start attracting a few students, he finds himself at odds with the other masters of martial arts. Along with this, a British boxing match is being set up and the tensions between the two cultures are clashing. Now its up to Ip Man once again to fight for himself, respect for the martial arts, and his people.

There are two things to be excited about for this movie. A) its a sequel to "Ip Man" (duh) and B) its got the fight reunion of Sammo Hung and Donnie Yen since "Kill Zone". Both of which, are great reasons to see this movie. As was mentioned before, this film simply tightens the screws on the elements holding it together. Although the drama seems a bit lessened than the first, the impact, particularly in the second half of the film, is just as powerful. This movie rocks the emotional investment the audience has with Ip Man and his cause for mutual respect amongst his peers and against the foreigners. The historical setting of Hong Kong in the early 50s is extravagantly used for great sets and a greater sense of realism. Partnering all of this with some great performances from Yen, Hung, and all the supporting cast and this film is really utilizing its story and execution well.

Of course, it must also be mentioned that amidst all of this great storytelling and acting, that it is, at its heart, a kung fu film. The fighting spectacular. Choreographed by Sammo Hung (who also did the first one), the fights are well shot with the director and well performed by all involved. We get a classic rematch between Hung and Yen (on a wobbling table of all places), a knife fight in a fish market, and of course, a brutal fight between our Western boxing champion Twister and Ip Man to finish it off. These all work well with in the confines of the story telling process and really ground the film into its kung fu roots and make it entertaining to boot.

The brilliance of the first film is outdone in almost every aspect with "Ip Man 2". It's one of the best martial arts films out there right now and is guaranteed to be a cult classic like its predecessor. If one is a fan of these genre films, then this is a must own, must see, and must worship kind of film. Now let the 'ip-sploitation' films commence.

BONUS RANT: Not sure who I felt, once again, by the Bruce Lee plug placed at the end of the film. Showing a young Lee show up at Ip Man's house might have been a nice touch (perhaps lead into a third film?), but it was a bit awkward with the written parts right before the end.