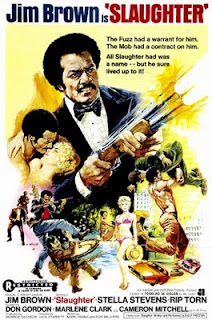 Unlike 80s hair metal "legend" Mark Slaughter, this Slaughter lives up to his name as Jim Brown sure knocks some dicks in the dirt in this high octane, James Bond influenced Blaxploitation effort.

Slaughter, an ex Green Beret, is POed as some assholes blew up his daddy's car with his daddy in it. He heads out for vengeance and guns down a few of the dickheads at a small airport but not without pissing off some federal agents who spent months tracking these drug dealers down. In order not to get thrown into prison, Slaughter agrees to go to South America to take the drug cartel down while at the same time satisfying his hunger for vengeance.

Ex-pro football player Jim Brown first got some acting chops in tough guy films like "The Dirty Dozen" before branching out and becoming a Blaxploitation icon. Does this mean he's a good actor? Hell no but he, much like the other ex-pro football player turned actor Fred Williamson, fit these roles perfectly making for some major touch guy icons as well as providing interesting film heroes for the black community.

Unlike Fred Williamson whose characters were always cocky and mouthy, Jim Brown's were always quieter, more repressed without losing the tough-as-nails edge. Slaughter is exactly this... mostly quiet but a tough mother-fucker who without flinching will shoot a guy in the back or chase them down with a car. Seriously this guy is one mean dude! And he seems like such a nice guy on the outside...

The filmmakers inject a lot of James Bond influences into the picture to with Slaughter basically acting as a secret agent. He goes to high rolling casinos attired in a tux, wins over villain's woman by bedding them, and most importantly can handle himself when it comes to action scenes, including but not limited to hand-to-hand combat and high speed chases.

The directing for the most part is solid with Jack Starrett knowing how to handle action scenes with a sure hand (he proved that again with "Race with the Devil). The only thing I questioned was his use of some odd squished picture ratios in his action scenes. I'm sure it was an attempt to be stylistic but it just takes you out of the movie for a moment making some think there DVD disc might be defective.

Is "Slaughter" a terrific film to be remembered for all the ages? Well no but it does what it intends to do.. provide audiences with an action packed Blaxploitation vehicle for Jim Brown with a heaping dose of sheer awesomeness. I enjoyed "Slaughter" immensely and am highly looking forward to watching its sequel "Slaughter's Big Rip-off".

Written By Eric Reifschneider
Posted by Cronosmantas at 8:03 PM