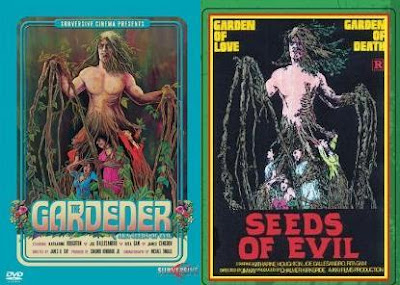 Here is an obscure hunk of shit I found at a pawn shop for a measly $2. What sold me on skipping out on buying a soda and instead use the quarters to purchase this disc was the description on the back of the DVD box artwork which states that "The Gardner" is a "flowery mix of 70s mod-art film, grindhouse horror and Italian giallo along the lines of horror mastros Dario Argento and Lucio Fulci". That statement got me excited as I lap up grindhouse horror and giallos. I should have known better than to expect something that good from a film called "The Gardner."

The plot has a women mysteriously die after looking at a flower (I shit you not) and one of her rich friends hires her hunky gardener to tend to her foliage. Sure this guy looks good without a shirt (yes he walks around the entire film shirtless) but it seems he brings death wherever he goes as all of his past employers have mysteriously died and or disappeared. It seems he is a Druid and now our rich pampered wife must destroy him.

I was really hoping this would be an over-the-top thriller comparable to William Friedkin's silly killer Druid opus "The Guardian" but no dice. What we get is an extremely boring, sluggish "horror" film that is big on filler and low, as in no, thrills. The film takes it's sweet ass time in trying to build suspense as our main character does detective work on her mysterious gardener's past but it leads up to nothing as our ending leaves too many plot aspects unresolved not to mention leaving the audience banging their head against the wall with its ineptitude.

The acting is below par with our Gardener being stiff and wooden as the trees in his garden when it comes to mumbling his lines. Hell we even get a poor man's Burt Reynolds look-alike as our main characters rich career focused husband who is of course too busy to take notice of her problems.

"The Gardener" is an obscure and boring film that deserves to be forgotten and ground up into sod to feed to your vegetable garden. Scratch that as this film no doubt would cause your plants to shrivel up and die. The groovy 70s soundtrack is the only aspect I can remotely praise this film about. All I have to say is that this 'gardener' can take his green thumb and shove it up his ass. This is just another dust collector to throw on my DVD shelf.

Written By Eric Reifschneider
Posted by Cronosmantas at 8:17 PM