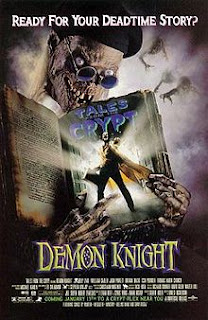 The first "Tales From The Crypt" film to make it the silver screen is a hell of a fun ride. "Demon Knight" piles on great amounts of gore, nudity, dark humor, and great one liners onto a story that aptly brings the atmosphere of the TV show into a new realm. Not quite a perfect film by any means, "Demon Knight" gets the job done bringing the loved TV show to theatrical quality while retaining all the elements that made its original format great. Not to mention its a laugh a minute for those with darker senses of humor.

Brayker (Sadler) may have finally outrun the demon collector (Zane). He stops off at a small motel in the middle of nowhere to rest himself and figure out a plan of escape. When the collector shows up though, Brayker and the fine people of an old church turned motel are going to have one hell of a fight on their hands. For the key that he protects, if lost, will let the demons have control of darkness forever.

The interesting aspect about "Demon Knight" is how well it works. Honestly, the script is barely better than one of the episode scripts for the show and without the talented work of its collaborators, it could have easily fallen into B-movie grade garbage. It doesn't though. In fact, the chemistry at work on this film is palpable. Director Dickerson seems able enough to build the atmosphere of horror and the sly wit of its humor together as one slick piece of work and combined with great art design, clever dialogue, and a great cast and this film works remarkably well.

That being said, at times it can be a bit cheesy. The film knows it and embraces this fact though and it smooths over any fractures this may have caused. When the owner of the motel lifts the stump of what's left of her arm and tells the collector she's giving him the finger, its a riot. It should have been stupid, but it was hilarious with its timing and presentation. To this, its helpful that the cast was so greatly chosen. Particular nods go in the direction of "Tales" vet Sadler as our ruffled and weather beaten hero and Zane as a hilarious demon knight with charm up the ass. Their chemistry on this movie and opposite styles make for great horror/comedy cinema.

"Demon Knight" is both scary and funny at the same time. With great designs (the setting is fantastic, the demons are creepy as hell with their beady green eyes, and the odd dream/memory sequences work nicely) and a great vision from the director, the film really shines when it needs too. The cast helps immensely too to create a fun and campy feel to the film. If only the theatrical "Tales" would have done better later on ("Bordello Of Blood" is hit or miss) then perhaps we would have had more great films to add to this series. As is though, "Demon Knight" is a treat to watch to this day.

Email ThisBlogThis!Share to TwitterShare to FacebookShare to Pinterest
Labels: Comedy, Horror, Tales From The Crypt