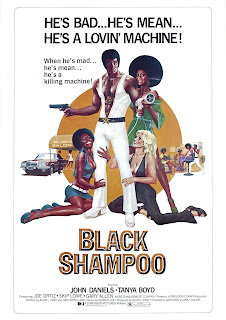 The poster artwork for this film has our afro bearing hero sporting a pistol in one hand and the other grasping a hair dryer all while having submissive beauties succulently grapple his legs. It's an amazing piece of art and for that alone it made this highly exploitative blaxploitation flick worth the five dollar purchase but I again was suckered by promising artwork and delivered a plateful overcooked chicken.

Jonathan is the extreme alfa male as he runs a gigolo ring out of his hair salon. Let's just say he's great at gelling up both sets of hair on women, both the attic and basement. Even though he's getting all the ass he could ever want, he still falls for his new receptionist who has an ass to die for... or at least to take the mob on for. She apparently used to be the main squeeze for a mafia boss and now her former boss wants her back but Jonathan won't have it. She escapes and our Black Shampoo hero straps on a chainsaw for vengeance. Trust me it sounds more entertaining that it is.

Out of all the blaxploitation films I have had the pleasure to witness, "Black Shampoo" is definitely one of the more exploitative entries when it comes to onscreen nudity and bloody violence. Our title hero gets so much ass I actually lost count. Exploitation director Greydon Clark actually has the film come to a complete standstill in order to have the camera linger on all tits and booty. Now I'm not against the female form but in this film it just comes across as cheap entertainment like Clark is trying to make up for the films other MARGINAL shortcomings by loading up on all the female flesh he can. We even get a sequence where our hero makes a house call only to get teenagers stripping around him before their mother comes out to give him a lap dance. What the fuck? This scene absolutely has no relevance to the rest of the so called "plot" and makes the film seem more like a cheap porno as opposed to a blaxploitation film.

I have a lot of problems with Greydon Clark's filmmaking as it looks cheap and sloppy. Now I understand this is a low budget drive-in picture but Clark doesn't even seem to be trying. I'm talking about bad zooms, poor pans and sloppy scene transitions (which he tries to cover with the on screen image going negative). The acting is despicable and the writing matches it. I haven't seen a film with so many pointless filler scenes in a long time. What's up with the barbecue sequence other than to pad the run time? Also if you like seeing people drive around then get ready for a shit ton of these long, boring scenes.

Sure "Black Shampoo" is high on 'exploitation' but it is low on actual film quality. I'm all for exploitation films but I prefer a little polish and good filmmaking to go along with those lovable ingredients. "Black Shampoo" just lacks good directing, good writing and good acting making this for a rather trying film experience and definitely one of the worst Blaxploitation films I have ever seen. If all you consider for a 'good' movie is nudity and violence then by all means give "Black Shampoo" a shot. The silly concept and promising poster artwork make this seem a lot more entertaining than it is.