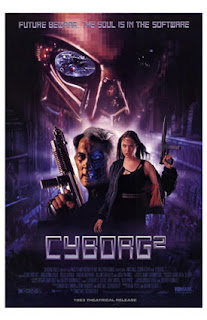 After viewing "Cyborg 2" I can honestly say that the writers originally wrote a script called "Cyborg". When they found out a film already existed by that title and went "FUCK!" and quickly slapped "2" in and haphazardly wrote in some lame references just to get by. As you can tell this 'sequel' really has NO connection to the original Van Damme vehicle and depending on your viewpoint that could be either a good or bad thing.

Well in the bleak dystopian future cyborgs are all the rave and two rival corporations are trying to destroy one another to make a monopoly. We then get introduced to sexy cyborg Cash (Angelina Jolie in her film debut) who has been injected with 'glass shadow', a liquid explosive so she can be detonated in the rival cyborg manufacturers headquarters. Well Casey Jones... errr.. I mean Elias Koteas falls in love with her and with the help of some weirdo tech goon that has a beef against the company, he escapes and has to lose a psychotic bounty hunter on their tail.

The look of this film is dramatically different than the first "Cyborg". That film was a braindead post apocalyptic action film set in a "Road Warrior" type future. Here we get bleak science fiction love film set in a "Blade Runner" type future. Sure the beginning shows a quick glimpse of some footage of the original film but I'm not buying it. Sequel my ass! This feels like a completely different universe. "Alien 2: On Earth" felt more like a sequel than this!

Looking past the fact that this in no way remotely looks like a sequel I have to say the filmmakers did try hard to make a 'good' science fiction film... emphasis on the word 'try.' They try to interject a loving relationship between our hero and the cyborg but it just mostly falls flat and I never truly felt the actors were into their roles... as if they knew they were in direct-to-video sequel to a Jean Claude Van Damme film. I did dig the dark, atmospheric setting of the future but again this is nothing new for films of this type.

The cast is surprisingly good for a film of this type. Elias Koteas is usually decent but he doesn't seem to be trying very hard here. Angelina Jolie is..... let's say she just wants to forget this film on her resume. Jack Palance plays his usual eccentric overbearing weirdo and we get Billy Drago playing his usual eccentric overbearing weirdo. Paycheck rolls for those two guys for sure...

"Cyborg 2" would have been better off not trying to have a connection to the original "Cyborg" as there really is no connection and the attempts to make some are extremely feeble and even laughable. It should have been its own separate entity. The filmmakers also try to make a decent science fiction film with romantic overtones here but the slow plot and lackluster characterizations keep this from breaking new ground. Hard core science fiction nerds might find some things to like here but give be the braindead Van Damme original any day over this... at least that one kept your attention.

Written By Eric Reifschneider
Posted by Cronosmantas at 10:49 PM