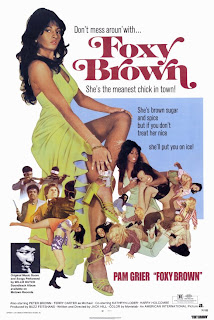 After the success of "Coffy" American International Pictures demanded another Pam Grier Blaxploitation vehicle as soon as possible and they employed writer/director Jack Hill with the nearly impossible task to release a quality follow-up within a year. Well he proves that lightning can strike twice as "Foxy Brown" is almost as good as his first Pam Grier match-up "Coffy" in every category making another quaint essential Blaxploitation classic

Foxy Brown is pissed... would you expect else? Her undercover cop boyfriend gets gun downed by the drug cartel he was undercover in but what makes it worse is that her low life brother ratted his ass out. She puffs out her enormous fro, straps on a pistol, and slips into the tightest, funkiest outfits of the decade to go undercover as a call girl to crumble the drug empire in a mass of explosions and gunshots.

Jack Hill makes "Foxy Brown" as graphically violent as his first entry into the genre and he happens to deliver a solid pulp dime store revenge story to wrap around grisly violence. Damn Foxy is hardcore! She covers a goon in gasoline and sets his ass on fire, dismembers a goon with an airplane propeller and even cuts off a guys dick and hand delivers it to his lover pickled in a jar. DAMN GIRL!

Pam Grier seems more comfortable in the genre now and her performance is a step above "Coffy". Her Foxy Brown character, thanks to her better acting is more of a strong willed, take charge women capable to carry out heinous acts of violence all in the good name of revenge. Did I forget to mention that Pam Grier has a body to die for? Don't believe me? Then pop in "Coffy" or "Foxy Brown" and you will have enough of her luscious skin to be stored in your fantasy banks for years to come!

Like all Blaxploitation films it is highly dated with its funky fashions and style but that's what makes these 70s Blaxploiation films so much damn fun! The plot is simple enough with the common thread of "revenge" to still resonate with today's audiences. I've actually run into people who were offended by the aspect that this film, along with "Coffy", had all the villains be high class, rich "white" people. No shit Sherlock! This is a 70s Blaxploitation film! It was another time with different viewpoints and I will happily watch such characters as Foxy Brown blow the living shit out of rich white criminal bigots who stomp on anyone in their path for wealth.

I can't say I liked "Foxy Brown" as much as "Coffy" but it's damn close and it's a wonderful follow-up by director Jack Hill who knows the exact ingredients these genre films need in order to be successful. For a great time go raid your trunk in the attic or the local salvation army to get decked out in polyester, throw on a James Brown album while making popcorn for a double feature of "Coffy" and "Foxy Brown". You'll be glad you did!

Written By Eric Reifschneider
Posted by Cronosmantas at 8:56 PM