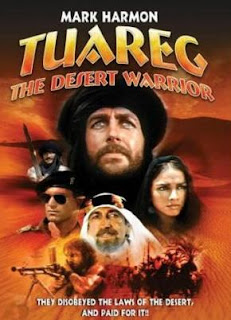 Enzo G. Castellari, known for his amazing Italian action films in the 70s, was really struggling when the 80s came calling directing a laughable "Jaws" rip-off with "The Last Shark" and a number of frivolous yet insanely entertaining dystopian future flicks with the likes of "The New Barbarians", "1990: The Bronx Warriors" and its sequel "Escape from the Bronx." To be honest Enzo had become a full fledged B-movie filmmaker regulated to making cinematic sludge... entertaining sludge but still sludge none-the-less. It was time to redeem his name so in 1984 he decided to adapt the novel "Tuareg" into a serious, well-meaning film so he can once again be taken seriously as a filmmaker. So did he succeed at redeeming his career? Well considering this film is relatively forgotten in his filmography I would have to say a big fat NO.

Mark Harmon plays the title character, with Tuareg meaning "Desert Warrior" (as you couldn't tell from the subtitle). Two dehydrated men wander into his camp where Harmon and his clan aid them back to health but not long after their arrival soldiers show up to truck them off as apparently they are wanted for murder. Harmon doesn't take kindly to this as you see, apparently due to his cultural beliefs, guests cannot be forced out of their host's home so he risks his neck to rescue these two guys and lots of people die as a result.

Castellari gives the film his wonderful style and makes it a mish mash of "Lawrence of Arabia" and "Rambo".... just far too much "Lawrence" and not enough "Rambo". Enzo is foremost an action director and "Taurag" does have a few good action scenes but they are too few and too far between with most of the film being filled with rather pointless dialogue. To be honest I lost interest a number of times during the running time of the film... and that NEVER happens when I watch a Castellari film even when his pictures are at their worst.

I do have to say that Mark Harmon, having a resurgence of fame with his leading role in the television series NCIS, is sorely miscast in the lead. He does have the piercing blue eyes that Castellari adores but he just doesn't pull off an Egyptian warrior well. He gets all tan and beefed up for the role (complete with plenty of eyeliner) but my real problem is his delivery of the dialogue. He dubbed his own voice but he gives a dead pan delivery with no attempt to hide his American styled voice resulting in his performance appearing rather half assed, like he just really didn't a shit. If he put more effort into his dubbing his performance would have been magnified ten fold. To be honest this role was tailored for Franco Nero, a frequent collaborator with Enzo G. Castellari. Where is Nero when you need him?

From a technical standpoint this is Enzo's best film of the 80s.... just far from his most entertaining. He tries exceptionally hard to make a serious film with a wonderful style and cinematography but Harmon's performance, lack of action, and a plot that I can't get behind the hero for makes this a rather dull affair from the master of Italian action. This is why it hasn't received a proper DVD release and has fallen into public domain hell regulating it forever to subpar DVD treatments. It's not good enough to be respected by cult Italian film fanatics and it's not bad enough to have the immense entertainment value trash fanatics crave. It's just middle of the road and really won't appeal to anyone unless they are hardcore Enzo fans (like myself). Enzo will always be my favorite Italian film director but I will be honest when I say "Tuareg" is really one of the most uninteresting films in his entire filmography.

Written By Eric Reifschneider
Posted by Cronosmantas at 9:37 PM