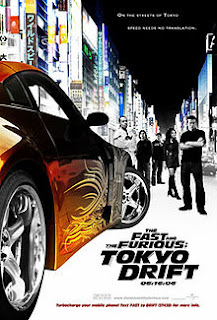 Let's be honest with one another here. Anything is a step up from "2 Fast 2 Furious" so its not that big of a shock that the third film in the franchise is an improvement. What is a surprise is how much of an improvement it actually is. "The Fast And The Furious: Tokyo Drift" is a surprisingly fun and ridiculous ride through the neon and curvy streets of Japan. Although its not a great film by any means, it has its redeemable moments and it focuses on these qualities, which makes it heads over tales better than it should be.

'Bama boy Sean (Black) finds himself at odds with the law once again in the US so his mother sends him to live with his father in Japan to prevent him from going to jail. Logic? Not sure, but while he's there he only learns to hone his solid racing/driving abilities by learning to 'drift' from the local street racers. When he gets caught up in some Yakuza business, he finds himself between a rock and a hard place. Can his newly discovered drifting abilities save his ass from the Yakuza?

There is a lot of things wrong with "Tokyo Drift". It's got a half assed script that rarely explains things the way they should be developed that undermines its characters and rarely gives us the motivation to care about the outcome of the situations that come into fruition. These writing flaws are only made more gaping by its lack luster 'hero' in Sean. He's stoic presentation of what wants to be charisma never works and despite some fun supporting roles (particularly the villain and his 'teacher' Han - sorry Bow Wow, but it wasn't you) it drags the film down into places it should have risen above.

That being said, "Tokyo Drift" has one element that makes it worth the watch. Director Justin Lin. Although I never saw "Annapolis", his work here is exactly what this franchise needed. A clever eye for bringing out the fast and the furious elements of the film without making it feel like a video game (even with all of the setting's bright colors). He seems to understand what this film needs in pacing and visually and he brings it all to the table. This allows for exciting car stunts and races (finally good car wrecks!) with a flair for the ridiculous that embraces its rather half thought out story. He single handedly gives this film most of its memorable moments.

Although this one is the most 'on its own' sequel in the franchise (although it has a pretty cool final moment that links it into the rest), "Tokyo Drift" overcomes many of its fault with charm and visual pizazz. It's foundations are cracked and shaky at best, but this one still turned out to be a fun film and an enjoyable watch. Very surprising, in the end.

Written By Matt Reifschneider
Posted by DarkReif at 11:07 PM