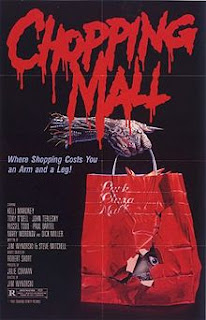 Can you smell that? An almost pungent dairy odor in the air? Aged for a few decades. No? Well I do. It's the smell of 80s cheese and that wonderful odor seems to be coming from "Chopping Mall", or previously known as "Killbots". Haven't heard of it? That's because the damn thing was hard to come by, but its reputation as a great B-movie lead me straight to it. Although it is a bad movie at heart, its so implanted in an 80s state of mind with its ridiculousness that I'll be damned if it isn't a shit load of fun.

A series of young couples decide that their friend's furniture store in the mall would be a great place to party and fornicate. So they wait til the mall closes then start the shenanigans! What they don't realize (or do...but seemingly could care less about) is that this mall is protected at night with huge steel doors and three security robots with sleeper darts, electric prods, and, naturally, laser eyes with enough power to blow a person's head up. When lightning strikes the command console for these normally nice bots, they suddenly lose control to become DA DA DUM killbots! Now these young folk have to figure a way out to stop these mechanical monsters so they can see the light of the next day.

Despite its newest title "Chopping Mall" and ridiculous poster art which make it look like a slasher film, this 80s ball of ridiculousness is all about man vs machine with shoddy special effects, unsympathetic characters, over the top death sequences, and a score comprised mostly of 80s keyboards. Now if they sounds like a party to you then join in on the fun and stay a little late after the mall closes!

"Chopping Mall" is bad. Oh yes, it is very bad. It's story is thinly stretched over its time frame and it's hit or miss on all of its on screen elements. The director does his best to navigate the flimsy script with some clever visual fun bringing out the humor in many parts (how the robots say 'have a nice day' after each kill is pretty funny), but even that can't save it ultimately. The acting is prime 80s crap, not that the actors had much to work with, yet I found myself oddly still rooting for them. Not that I cared if they lived or died, but some of the odd plot ways they thought of to kill the killbots was intriguing. What mall carries open guns and live ammunition (a machine gun to add to it)? Where do they find all of these propane tanks? The film is so baffling that I found myself sucked into it. Most of it made very little sense, but I was intrigued to find out where it would go next! A true sign of great B movies!

This is one of those films that requires a certain...taste to enjoy. It's completely out there with off the wall plot movements, horrid on screen effects, and over the top acting, but its a riot to watch. There is something to be said about the magic and fun of the 80s genre film and "Chopping Mall" embraces that in spades. If you seemingly cannot stand any of the elements I mentioned above, avoid it like a robot about to run you over with its treads. If you have the guts and sensibility of a cult film fan, then this is a must see. Even if it is as bad as it is.

BONUS RANT: Dick Miller (from "Gremlins") has a bit part as a janitor that is one of the first to be knocked off by the killbots...oops spoiler. If only he had been in it longer, cause his part was awesome as a mouthed off to the robot as if it meant something. Sigh. He is only in it for a few minutes though.

Written By Matt Reifschneider
Posted by DarkReif at 11:51 PM