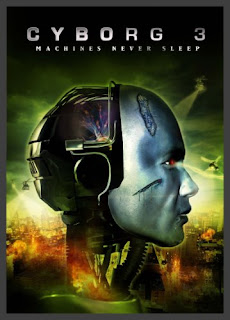 "Cyborg 3" is by the far the rarest film in the so called "Cyborg" trilogy. It got a very limited VHS release with the title "Cyborg 3: The Recycler" and just recently got a DVD release despite the first two entries being available for more than a decade. Trust me... there's a reason. I never thought I would ask such an asinine statement but where is Albert Pyun when you need him?

Taking place in a desert-like post apocalyptic landscape, we continue the 'adventure' of sexy cyborg Cash now played by Khrystyne Haje (hmm... I wonder why Angelina Jolie turned this down?) who has outlived her human husband Casey Jones. Well she visits her 'cyborg gynecologist' and finds out she's pregnant. Soon she is being chased by a psychotic cyborg hunter known as The Recycler (Richard Lynch) and seeks help of a secluded cyborg technician (Zach Galligan) and an army of mutilated cyborgs that live in a hidden town to defeat the Recycler and his army of cyborg killers.

Director Michael Schroeder returns from "Cyborg 2" and I will give him credit for giving the film a similar landscape look like the original film (unlike the "Blade Runner" like setting of the second) but I may giving credit where credit isn't due as he no doubt was forced to film in the Nevada deserts as it is far cheaper than trying to make a film with a dystopian city landscape.

The budget is the problem here as this even looks to have a fraction of the budget of the second film. This is most evident in our Recycler's mobile "semi" that looks like a deformed bastardized cousin of the monstrous tech semi from "Universal Soldier." This damn thing looks like it's going to fall apart at any moment!

Schroeder also loads this film up with numerous moments of really lame comedy... possibly to help hide the shoddy production values. Most of this lame humor has to do with our ragged group of broke down cyborgs. How long does it take for a stuttering cyborg to get annoying? Answer: 1 second and it's a damn shame that Schroeder has it go on for a half an hour!

The cast, like the second film, looks promising and fans will gravitate towards the name Malcolm McDowell but trust me his role is nothing more than a glorified cameo. Richard Lynch steals the show as the Recycler. It's not a stretch for him as he was born to play these despicable villain roles but he does it well as usual. Zach Galligan phones in his performance like he was wishing he was doing "Gremlins 3" as opposed to "Cyborg 3". I should mention this film also stars Evan Lurie in a small role as a sword wielding cyborg. Don't recognize the name... well he was one of the main stars of the notoriously awful yet immensely entertaining "American Kickboxer 2." Any connection I can make to that film just brings a grin to my face.

"Cyborg 3" may have a setting more reminiscent of the first film but this low budget pointless film is rather lame with a slow moving plot, mostly bad acting and awkward and dumb humor moments. If Albert Pyun returned to direct this (I can't believe I'm saying this) this could have had some entertainment appeal due to unintentional laughs but as is they should have retired this lamentable trilogy after the original guilty pleasure.