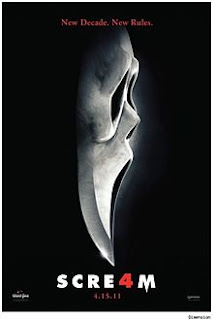 What do you know? Even after a decade of sitting on the shelves of young horror fans everywhere, they decided to dig up this franchise and try to breath new life into it. Reportedly, this is to be the first of a new trilogy. Thusly, with Craven returning to direct and Williamson returning to write...some of it...we have our hands on "Scream 4" or the stupidly stylized "Scre4m". The results are rather mixed. It is the best "Scream" sequel out there (can you really get any lower than "3"?), but its still a rather flawed film. All in all, its fun, but still a rather cliche' slasher viewing experience.

Sidney (Campbell) now has a hit book out, like everyone else in these movies, and on the last stop of her tour she comes back home to Woodsboro, the illustrious home where the kills started in the first "Scream". Turns out someone else has also returned to the town dawning the mask and shiny knife of Ghostface. Blood starts pouring and the body count rises pretty quickly. Now its up to Sidney along with life long 'friends' Dewey (Arquette) and his wife Gale (Cox) to figure out who the new Ghostface is before all the teens in Woodsboro find themselves taking a dirt nap.

Sometimes it's baffling to me how this franchise took off. It's a self referencing horror film series. It worked in the first one, but the eventual sequels saw its cleverness buckle under the weight of its own idea. The same goes for "4". This time it references modern horror films (with direct call outs to the "Saw" films and all the ridiculous remakes) and how the game has changed. The slogan of the film is: "New Decade. New Rules." Despite this rather intriguing idea and the mass references to the first film - including a very cleverly staged finale with the reveal of our killer(s?) - it only works here and there. The film tries to use this idea that has been rather run ragged as a way to create a new improved cleverness for the series. Sometimes it thinks its way more clever then it actually is (the opening sequence did not sit well with me as it thought it was VERY clever) and half the time you find yourself laughing at the film's expense rather than with the film and its homages.

Luckily, the film does carry some charm to it. Having the original cast return was nice and they do their parts ably, but some of the new comers feel like they are caught on a crossroads. Not able to truly take the spot light for the previous leads, they sit in a purgatorial written state of being fodder in a film that seemingly wants to pass the torch on. Craven does what he can with his directing, showing some flair for the tense and suspense, but fleeting when it tries to show itself as a 'modern' horror film. Many of the scares do work and the added violence/gore seems fitting for modern audiences.

Although the film was still fun and had a rather clever idea to work on, I couldn't help shaking that dreadful cliche' factor. Although the idea was to mock on modern slashers, they missed some of the places they could have run with it (although essentially doing an homage the first "Scream" as a modern slasher worked) and the film still fails to find that balance that the series has been striving to achieve for so long. It's better and I appreciate the effort placed into the film, but it still falls short. Not sure how the reported next two films will fare as a second trilogy (where do you go from here? Really?) and it would have been nice for this film to tie the series up with a rather clever twist instead of the same old same old.

Written By Matt Reifschneider
Posted by DarkReif at 4:21 PM