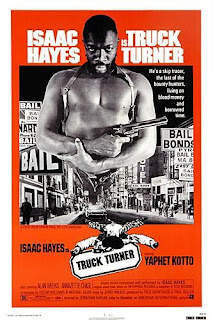 Isaac Hayes wasn't content winning Oscars for being behind the scenes with writing and performing amazing Blaxploitation film soundtracks. He wanted to spread his wings and become a full fledged Blaxploitation star and Hollywood gave him a chance as they cast him as the title character in "Truck Turner." Did he have what it took to become a legend in the genre?

Well "Mac" Truck Turner is an ex-pro football player turned bounty hunter it's not an easy way to make a living. Day in and day out he and his partner risk their lives just to bring home ends meet. It even gets in the way of their love lives as Turner even forgets to pick up his main squeeze the day she gets released from prison and bribes her love back with a six pack of buds. The shit really hits the fan when they are forced to kill a pimp they were paid to take in and his women hires out the strongest gang leaders in L.A. to bring her the head of Truck Turner. Sounds like it's going to be a white hot night of hate to me.

Isaac Hayes proves he had the balls and charisma to pull off a likeable Blaxploitation lead and doesn't do half bad in the acting department. His wonderful deep singing voice does make it a little hard to understand some of his dialogue but his voice mixed with some thigh slapping hilarious one liners is fantastic ("either shit or get off the pot" is my personal favorite line). Hell I would even say he matches the screen presence of other Blaxploitation legends such as Richard Roundtree and Fred Williamson.

The highlights of the rest of the cast includes Yaphet Kotto as one of the mob bosses out to shoot off Turner's ass. Yaphet is such a bad ass villain that he should have been cast as a James Bond nemesis (whoops, my bad... he was). His character is so menacing that he even kills Turner's cat and hangs it to scare the living shit out of his girlfriend. The cardinal sin of this film however is that they don't utilize Yaphet enough as character has far too small of a part but still manages to make a nice adversary for Turner especially during a violent hospital shoot out.

The star that outshines Yaphet has to go to actress Nichelle Nichols. I will admit that I am a closet "Star Trek" fan (God forbid you might call me a 'trekkie') so I had a hell of a time seeing her spout off vulgar language like "...they better get used to selling their pussy in Iceland because if they show their faces here again I'm going to slit their fucking throats!" Uhura, do you kiss your captain with that mouth?

Jonathan Kaplan handles the film well and gives us some pulse pounding action scenes brimming with violence that the subgenre has become known for. Suspenseful car chases: check. Shootouts with pimps and naked hookers wielding knives: check. Bloody shootouts in hospitals that apparently have no security: check. Random violence against a housecat: check. Oh yeah, Kaplan knows how to make an entertaining Blaxploitation film.

So in answer to the question I ended my first paragraph with I would have to say YES as Isaac Hayes owns the role of Truck Turner. It's a damn shame the film wasn't a bigger hit in theaters as I would have loved to see Hayes in more films of this nature or even a sequel. Shaft, Slaughter, and Black Caesar all got sequels but not Truck Turner.... BLASPHEMY! In my humble opinion "Truck Turner" is one of the most entertaining films the notorious Blaxploitation genre has to offer so pick it up already!