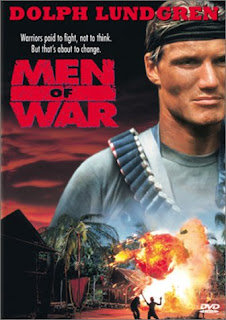 Thanks to the release of Sylvester Stallone's "The Expendables" aging action stars like Dolf Lundgren have been revitalized and due to this people are starting to look back at his old action films.... hell it even worked on me as I haven't seen many of his action films in years. As I go through my DVD collection of Lundgren action films it is easy to say that he hasn't had the most prolific career in the "action film" department compared to his action hero brethren due to most of his films being really, really forgettable. "Men of War" is one of his many action films that fall under the dreaded word "forgettable."

Lundgren is a special forces assassin who is brought out of retirement to gather his old crew of war buddies to head down to a tropical island in order to convince the local tribes to sign a contract so greedy businessmen can come in and mine for jade. Lundgren in good Pocahontas fashion falls in love with one of the tribal women, loses track of his mission and turns on his team and mission. Of course a blood bath ensues.

I don't expect exceptional plots when it comes to action films but Jesus Christ these type of plots have been done to death, even by 1994 when this was made. Really how many action films start off with a retired assassin or mercenary not wanting to come back, but later convinced to by an old friend only to end up being enemies with the very person that hired him. Fuck... I've lost count!

The cast is made up of some great character actors that many action fans will instantly recognize, most notably the Australian actor that played Kano in the "Mortal Kombat" film and other notable jackasses. Hell we even get a young Catherine Bell (famous now for the chick TV show "Army Wives"... you can thank my wife for drilling that bit of trivia into my skull by constantly watching that overly dramatic show) but her character is basically pointless other than providing the predominantly male audience with some eye candy. Dolf Lundgren himself actually doesn't do to bad of a job in the acting department and he really shows he's come a long way from the early days of "Masters of the Universe" and "Red Scorpion."

My main beef with this action film is the lackluster direction by Perry Lane. How did this guy fuck up so royally? He had a dream cast for an action film, a typical action packed plot but he ruins it by giving the film a very flat, made-for-TV vibe to it not aided by some very annoying uses of slow motion. His directing is so pedestrian I felt like I was watching an episode of "Tour of Duty" as opposed to a DOLF LUNDGREN ACTION FILM! Fuck I shouldn't be surprised to learn that all this asshole did after "Men of War" was direct hundreds of television episodes for various series... including fucking "Army Wives." No wonder I found myself losing attention...

Dolf Lundgren does a better acting job and the rest of the cast is made up of a dream team of character actors but thanks to our boring, made-for-TV like approach to the directing this action film never takes flight and it had the ability to be an insanely entertaining action film with the ingredients it had. Where's Cannon films when you need them?

Written By Eric Reifschneider
Posted by Cronosmantas at 7:23 PM