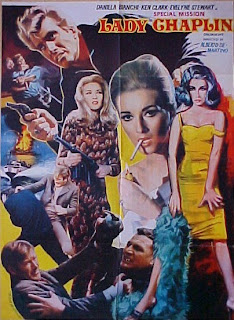 Much like the third James Bond film "Goldfinger" perfected the Bond formula, the third Dick Malloy film "Special Mission Lady Chaplin" perfected the Bond knock-off formula. Seriously this is the most fun, action packed and entertaining of Italy's Agent 077 trilogy and defined what an Italian Bond clone film should be like.... which is a Bond film, what else?

The plot is typical Bond-esque espionage material with a sunken nuclear submarine somehow moving locations. In comes in secret agent 077 (damn that number makes me crack up every time... seriously could they reference the franchise they were ripping off any more obviously?) who discovers that the nuclear missile cargo as been stolen. Now 077 must track down a beautiful and lethal assassin known as Lady Chaplin to "charm" her into revealing her knowledge about the whereabouts of the missiles. Like Bond, the charming comes naturally.

Like a good Bond clone we get all the necessary staples. Car and foot chases: check. Bodacious European babes: check. A world domination plot: check. Gadgets: check (including a ejector seat car mimicking Bond's car in "Goldfinger" and a pocket air breather mimicking Bond's in "Thunderball"). A catchy title song: check. A heroic spy that's a wonder with women with a Conery-esque hairy chest: check. The only thing this film is missing (that the previous two 077 films "Mission Bloody Mary" and "From the Orient with Fury" got right) is a swinging 60s title sequence... seriously what the fuck? How could they miss out on that fact?

Collaborating director Alberto De Martino helps director Sergio Grieco brings some new life into the franchise (is "franchise" a proper term for an Italian knock-off trilogy?) with tight action sequences and an intriguing, though a little corny, espionage plot. Ken Clark is still very fitting into his spy role and Daniela Bianchi keeps your eyes glued to the screen with her beauty and lethality as our assassin. Does her name look familiar to you? Well if you're a Bond fan then it should as she played the leading lady in "From Russia With Love." Shit our filmmakers weren't content on copying the Bond formula they decided to steal some of that franchises leading actors as well! That's fine by me as Bianchi gets this reviewers mojo running any day.

Typical with Italian films the dubbing is a little off and some of the dialogue is hilariously translated. My personal favorite is when they find the location to the missiles, agent 077's boss (equivalent to M in the Bond franchise) tells him "that's the way the cookie crumbles" when no reinforcements will be able to back him up. Our "Bond" hero also isn't as "smart" as 007 per say as he was even oblivious that nuclear missiles don't detonate when a fire breaks out. Fuck even I knew that nuclear missiles were designed to survive a crash... and I'm not even to be educated to be a secret agent (you can thank John Woo's "Broken Arrow" for teaching me that little fact :-} ).

Some of the story elements are also a little silly and convenient for the plot. Lady Chaplin smuggles in rocket fuel for the missiles by soaking it into the fabric of some dresses which of course makes one unfortunate model hilariously explode into a ball of flame. Also our main villain conveniently keeps fucking scorpions in his missile bay so they can aid 077 in his mission. Really who the fuck keeps scorpions in their missile bay?

Other than those few hilarious plot quibbles I have to say this Bond knock-off is almost as entertaining as an actual Bond film. Like the previous two films it utilizes is low budget well by making the most of it's authentic European locations. Mix that with all the other essential Bond ingredients and you're guaranteed a fun espionage romp and a must for fans of the Italian 'Euro Spy' genre.

Note: Like the previous 077 films the Dorado DVD release has the picture ratio screwed up making the image annoying elongated so all our characters look 6.5' tall. Again, I keep my fingers crossed, I hope Dorado films fixes this defect on future releases so we all can truly enjoy this trilogy the way it was meant to be seen.

Dick Malloy will return in... damnit, this was the last 077 film! Shit... just when they perfected the formula.
Posted by Cronosmantas at 9:02 PM