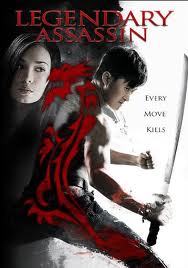 Two words aptly describe "Legendary Assassin" - failed potential. The few movies I've seen with Wu Jing (the stellar "Invisible Target" and his brief but badass fight sequence with Donnie Yen in "Kill Zone") have shown him to be a charismatic actor with a strong presence on film. His debut directing effort shows that he is neither charismatic nor strong behind the camera despite his cold and rather subtle work on screen. This leaves the film prey to its rather cliche story and hit or miss cast. Not something that "Legendary Assassin" needed.

Bo (Wu Jing) is an assassin whose conscience is starting to catch up to his quick feet and fearless killing strikes. His latest target happens to be a very well connected mob man living on an island. After Bo takes his head, he finds himself stuck on the island due to a storm and caught between some rather under trained police officers and some under trained thugs looking to take him down. His new friendship with a police woman (Celina Jade) seems to be the only thing going right, but will she have to arrest him before he has a chance to escape?

Meh. "Legendary Assassin" is just one giant 'meh' after another. The casting is rather lackluster and despite some intriguing fight sequences (alright, I can admit that the final throw down of Wu Jing verses the entire black clad army of the mob is pretty sweet), the film lacks some serious flow and charm. The plot is pretty cliche and rather corny at times, his love for the police woman seems a bit ridiculous and their 'dance' sequence on the roof is hilarious forced, and the film fails to garner any momentum against it. Wu Jing does carry that intrigue with him onto the screen, but his presence as a cold/warm person of subtle quiet resolve and mystery just doesn't make up for the rest. His co-directing definitely fails to impress, its only his first so I won't be too hard on him - I still love to watch him, and this undermines an already sub par story.

The fights are pretty solid though. We get some great choreography for Wu Jing, although it does get a bit out there at times. He has a pretty stellar leap as it turns out. The final battle is pretty cool even though it is cliche in its build and look...I mean how many final fights happen in the rain? It does have some great choreography and stunt work and it makes up for what little this film has going for it.

"Legendary Assassin" is just too much cliche when it comes to its cheesy acting and run of the mill story. Wu Jing impresses on screen with some of his fighting and stone cold yet warm acting, but his co-directing rarely brings out the film's better moments and it hurts it badly. It might be a good rental (I got it out of Red Box) but not much more than that.