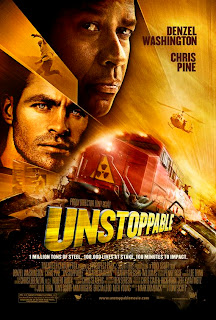 With the 1985 film "Runaway Train" being one of my all time favorite films I took notice of the new Denzel Washington thriller "Unstoppable" as from the trailer it 'borrowed' many ideas from that award winning and criminally underrated gem. Curiosity on how much plot this film stole and for the fact my wife lives and breathes Denzel Washington got me to actually sit down and watch this typically pretentious, over produced Tony Scott film when normally I wouldn't even give it second glance. Well I can be honestly say it met my lowered expectations.

Well the plot is simple enough as we have an aging train engineer training a cocky rookie when their day becomes more exciting when an idiot loses control of a train and they have to run the bastard down and stop it before it rolls taking a tight and rolls exploding thousands of gallons of lethal chemicals.

Typical with Tony Scott films he makes any profession seem like it is the most pivotal and important job on the plant. It worked in "Crimson Tide" as a commander of a nuclear submarine IS one of the most stressful jobs on the planet. A train engineer.... not so much. Thanks to Tony Scott he makes it seem that being a train engineer is fucking rocket science. Now many people are going "what the fuck to you know, you're not a train engineer." Well I do know people that are train engineers and they say it's one of the most laid back, easy going jobs you can imagine. Thanks to Tony Scott he can now convince people that that you need to a NASA certified scientist to handle the stress. I would hate to see a Tony Scott film about being a busboy... fuck I would have no self esteem to think I could make it working in the adult world.

Denzel Washington has always been a fantastic actor and I respect him for that but as of late he has been teaming up with Tony Scott far too much and in turn playing the same damn characters over, and over again. Since Denzel is getting up there in age the filmmakers decide to throw in a young 'sidekick' in the form of nu-Kirk... errr.... I mean Chris Pine. Pine plays the typical arrogant fuck-up who has a problem with spying on his family and needs to redeem himself thus gaining his family back. Oh... this also stars Ethan Suplee in a supporting role. Considering he usually plays dumbasses, guess what role he plays? Yea the dumbass that loses control of the train. Type casting anyone? The rest of the charcters are all typical cliche crap including the red neck, the career driven woman and the overbearing boss who won't listen to suggestions.

Like expected the film does 'borrow' a few elements from "Runaway Train." Of course the basic plot of a train going amok but also a scene where authorities attempt to land someone on the train from helicopter that predictably turns bad when he takes a dive into a windshield. Oh the sharp curve... yea that's also stolen. Mix all that with Tony Scott's over-direction, flash editing, crass dialogue and forced drama and you have the typical Hollywood disaster puke for the post-MTV generation.

Unlike "Runaway Train", "Unstoppable" lacks soul and artistic merit. It's nothing more than an overproduced, pretentious Hollywood sludge from the Tony Scott film factory that is really nothing more than a highly glossed TV movie with a strong leading man. Denzel Washington fans are the only ones to board this train as it is destined for derailment around the bend.

Written By Eric Reifschneider
Posted by Cronosmantas at 11:42 AM