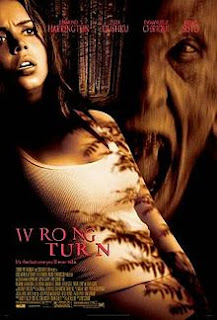 Upon its release, the slasher/fucked up hillbillies horror film "Wrong Turn" received mixed reviews. This is one of the reasons I never got around to watching it until now. Turns out my feelings toward the film are also mixed as it easily lumps itself in with peers in the style, but occasionally rises above for some seriously solid horror moments. Not a great film, but one that works at its hardest to accomplish the task at hand.

Chris (Harrington), like most young aspiring Americans, is in a rush. He has to get to Raleigh very quickly and when a road accident forces some hefty delays he decides to take the back woods roads through West Virginia instead. There he runs into a group (with the sheer force of a muscle car) of other young adults whose car has been struck down by some oddly placed barbed wire. It just so happens that three imbred yokels have it out to make these people their next meal. Uh oh!

Despite being a film that has now spawned three sequels (part four gets a release fairly soon at the time of this review), "Wrong Turn" goes about its premise in many of the most cliche and well treaded ways possible. The script is rather uneventful and by the numbers with its obvious characters and the ways that it goes about knocking them off. It's boring for the first half at least. The acting is hit or miss and our plot progression is easily foreseen. Blah blah blah - we get the point. Set it up, now knock it down.

Luckily, this is where we begin to see some potential with "Wrong Turn". Director Rob Schmidt busts his ass off to blend an old school slasher aura with modern techniques. It works in spades in the latter half of the film. The budget hinders some of the better special effects (with some odd CGI shots that were great in theory but off in execution - sans a very badass death scene for one of our protagonists in the tree hopping sequence) and Schmidt seems at a constant battle with mediocre performances all around, including a hilariously lackluster monologue from Dushku. Yet, he does his best to kick up this film to the next level. Props for that.

There are things to love and hate about "Wrong Turn". I love the 80s simplicity to the film mixed with a more modern flair given to it by Schmidt, but the rather lackluster script and hit or miss performances suck quite a bit of life from the film. Although it wasn't the modern slasher fiesta I wanted it to be, its solid enough to earn a bit of merit. Mostly for horror fans and those looking for solid modern slashers.