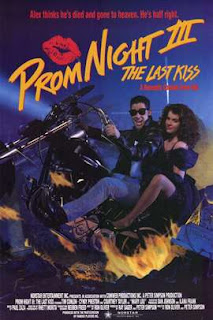 We open with Mary Lou (now played by Courtney Taylor) escaping from her shackles from hell with a nail file (yes, you read that right). She proceeds to head to her old high school and seduces a young smartass. Who cares if she kills people doing you harm, as long as she's a good lay... right? He goes along with her plan for a while but when he decides to break their relationship off, all hell breaks loose.

The second film has some comical moments but it was well balanced out with the horror. It was always a horror movie through and through first. Much like "Nightmare on Elm Street 4", the filmmakers here opt to load the film up with comedy tarnishing the horror elements in he process. And like "Nightmare 4", most of the comedy moments fall flat.

The look of the film is also lacks the sleek, polished and well edited feel of it's predecessor. Could this be due to budgetary reasons? Possibly but it also makes me question as the film credits two guys as directors: Ron Oliver and Peter Simpson. Oliver was the screenwriter of the second film and Simpson of course is the producer. This is never a good sign as 9 times out of 10 the producer took over directing duties as he was upset with the job the director was doing. I don't know if this is the case or not but it doesn't bode well with directors credited in this manner.

Another problem with the film Courtney Taylor as Mary Lou. Lisa Schrage in "Prom Night II" was able to convey both seduction along with terror and sadism. She was sexy while at the same time being deadly making her perfectly cast as Mary Lou and it's a damn shame they weren't able to her to return. Taylor is easy on the eyes but she's hardly scary and never bought it for one moment that she was a killer. She was just a whiny, high maintenance bitch that happened to kill anyone posing a threat for her boyfriend.

The killings are also overly silly. We get a teacher cut up and filled with fruit and ice cream, a school counselor killed with battery acid raining from a hair dryer and even the star quarterback getting killed by a football made to look like a drill bit. These killings are so cheesy that even Freddy hit his head with frustration.

"Prom Night III" attempts to make a franchisable slasher icon with Mary Lou but thanks to poor casting for the character and an overly comedic approach to the subject matter, Mary Lou would be buried for good and never resurrected again for another sequel, despite a forth film appearing a few years later. "Prom Night III" proved to be so disappointing that it even debuted as a direct-to-video feature in the United States despite being made to be theatrical film. It's not completely worthless but considering how surprisingly good "Prom Night II" was, "III" ultimately became an utter disappointment.

Even more disappointing is the DVD release by Artisan. Obviously a VHS transfer, to add insult to injury it is a VHS transfer of the TV edit of the film. All the foul language is replaced with words like "frickin" and all the gore ended up on the cutting room floor. Even during the interesting climax where our heroine goes into hell to rescue her boyfriend (ala "Hellbound: Hellraiser II") the film has some video blips showing how wore out the VHS source was. A sad day for a DVD release.

Written By Eric Reifschneider
Posted by Cronosmantas at 9:24 AM