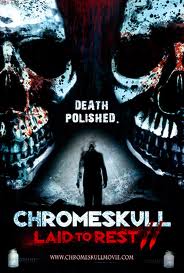 The first "Laid To Rest" garnered some praise for its mixture of modern style and throwback slasher motifs. It was also a film that suffered from both of these as its acting and plot logistics overcame the solid directing and very awesome villain. This is why "Chromeskull: Laid To Rest 2" intrigued me so. It had to improve on these elements to create a better film and it certainly does. Not to the extent I would have hoped as it still suffers a bit from the same flaws, but its new directions and increased presence of pacing certainly help.

Three months after the events of "Laid To Rest", a mysterious organization that the silver skull wearing serial killer runs has kept the villainous knife wielding maniac alive. Now our last remaining survivor Tommy (Dekker) must work with a police unit hunting down Chromeskull before he starts his killing spree again. Can they stop him before he gets to them first or will upheaval in the ranks of Chromeskull's organization crumble the entire plan?

Where the first film very much structured itself and followed the blueprint for 80s slashers as close as possible, "Chromeskull" takes the franchise towards a more modern slasher style to match Robert Hall's solid directorial look. Although it still highly enshrouds the villain in cloak and dagger, it does bring this "organization" to light and gives us a new villain in the form of the efficiently dangerous Preston (Brian Austin Green) who also happens to be the best actor in the film. Even though much of the logical progression of the plot seems to be secondary to its pacing (people drive very quickly from place to place here), the rather interesting directions that Hall takes this sequel and the dynamics of the villains makes it worth watching just for that.

For the other part of "Chromeskull", Hall and company continue with the slasher run-around. Our heroes are rather weak honestly as protagonists and the actors match it with their rather lackluster performances. The first half of the film has some stunningly awesome kill sequences, but it gets a bit repetitive by how it goes about weaving in the slasher-ing with the secondary plot of the organization. It's not until the last act when it all comes to a head that "Chromeskull" truly pushes its slasher moments to full speed and that's when the film works best.

"Chromeskull" has to work its ass off once again to overcome its budget restraints and plot inconsistencies, but with an even more clever idea, another bout with an awesome slasher killer, and some seriously great special effects this sequel actually outperforms the original one. It takes the chances and they pay off.