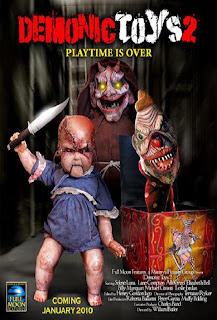 A collector of rarities shows up at an old Roman castle in order to collect an ancient toy unearthed by an archeologist. Of course he brings along a few demonic toys he picked up and an ancient evil brings the toys to life and possess the body of a psychic midget.

The continuity to the first "Demonic Toys" films is shaky at best (a character from the film "Hideous" even shows up). How did this collector get his hands on the toys from the warehouse in the original? It's never explained. Also not all the toys return so die hard fans will be disappointed that only Baby Oppsy and the demonic jack-in-the-box make an appearance but they might dig their new "Bride of Chucky" sewn-up appearance.

The production values are as low as they get, which isn't all that surprising. Director/writer William Butler does what he can but the film is still loaded with cheap-jack CGI effects and blood. The setting in a Roman Castle is no doubt due to budgetary reasons as it would be cost effective to film in producer Charles Band's personal property.

The plot is connect-the-dots loaded with the most cliché characters one can puke up onto a screenplay. Super smart, sexy archeologist, handsome love interest, creepy midget, and bitchy rich cunt all make their appearance and all the unlikeable ones predictably die off.

"Demonic Toys 2" was a valiant effort but it wasn't worth the 18 year wait after the guilty pleasure original. The cheap, digital look, bad CGI effects, bland plot and cliché characters makes this not near as fun. On the other hand it's far better than most of the shit Full Moon has been churning out for the past number of years.