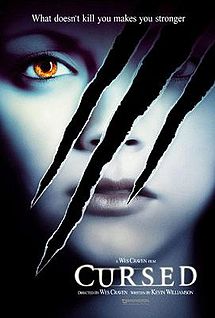 Wes Craven's career as a director had be in a pretty steady decline for quite some time at the point that "Cursed" was released and as unfortunate as it is, this teeny werewolf film doesn't help it at all. Granted, it's not all Craven's fault here, in fact his directing is probably the highlight of this film, but a very cliche and overly silly script collapses the film from reaching its potential and the obvious production flaws build a film that's shaky at best. It has some hilarious moments, but nothing can right this sinking horror ship.

Ellie (Ricci) does her best to balance her complicated life of raising younger brother Jimmy (Eisenberg), working a successful career in TV, and finding out if recent boyfriend Jake (Jackson) might be the one. It's made far more complicated when a car wreck leaves her and her brother bitten by a massive werewolf. A bite that seems to leave them discovering some new abilities in themselves and a curse that might not have been an accident...

The most distinctive thing about "Cursed" is how rather unmemorable it is. It sounds silly, but I only watched this film a few days ago and when I began this review I could hardly remember anything about it. Now I have it playing in the background just so I can refresh my memory of what the hell even happened in this movie. This is not a great way for a film to leave its mark.

Beyond its rather striking mediocrity on leaving its stamp upon the ole noodle, "Cursed" is about as middle of the road as they get. Never seeming awful in its execution with some solid directing from Craven and a rather fun performance from Eisenberg as the nerdy brother, its just so damn by the numbers. Blah blah blah. Mark of the beast. Blah blah blah awful high school sequences with shitty dialogue. Blah blah blah super shitty character developments. The fact that this film was supposed to focus on the brother/sister duo and their growth with their new discoveries should have worked...it doesn't. Horrible pacing that seems scared to let characters talk too long without some sort of hit or miss werewolf action ices over a script that was obviously reworked far too many times (the stories about the atrocity of this films production are more intriguing that this final product) and tries far too hard to be hip. It's frustrating to watch a film with potential fail over and over again.

Granted, the film occasionally has its charming moments (never thought I would see a werewolf flip somebody off before) but they come far too rarely to win over this ship wreck of a foundation. "Cursed" tries and it earns a few points for Craven's decent directing and attempts to make it interesting, but its super poorly constructed plot progressions and awful attempts at being smart with its character twists just becomes too irritating to overlook.

"Cursed" might earn some merit along the way for being a cult film that has some moments here and there, but the general mediocrity of its execution just can't save it from the awful script and rushed ideas. Was it the true atrocity that so many claimed? Not really, "My Soul To Take" would eclipse that, but it certainly couldn't climb out of its own grave either. Massive disappointment.