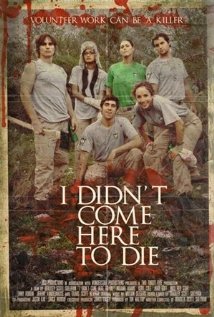 Sometimes it's the best choice to go into a film with no expectations whatsoever. This is how I went into "I Didn't Come Here To Die" and it left me with a rather pleasantly surprised experience. Of course, its neither the most original film not is it going to knock you dead with its rather by the numbers plot progression, but the oddity of its style and strong final half do much to impress.

A group of volunteers, each with their own reason to be there, head out to the middle of a remote woodland area to begin work at building a new summer camp. The group of youth kid about the legends surrounding the area, but when some very frightening accidents begin to happen, the line between the supernatural stories and the volunteers' sanity blur.

The most interesting and rather unique aspect of "I Didn't Come Here To Die" is how it blends the old school horror and the new school style. The directing is obviously done in a modern and sleek style utilizing lots of extreme close ups, rapid fire edits, and a bit of that modern shaky camera. This is partnered with a rather Grindhouse inspired aesthetic of gritty film, the creativity of working around its low budget for some interesting and brutal death sequences, and obvious homages in its intro (including a very badass title card). This combination proves to be a lethal idea that works well to embrace both worlds in harmonious combination of old and new. Certainly the highlight of the film.

"I Didn't Come Here To Die" also does well to keep its focus blurred with its writing. Normally, this is an aspect that would drive me insane, but the writing and on-screen delivery keeps the film balanced between having its motive be supernatural or whether its all in the volunteers' heads. Although I would have liked the film to further deliver in characters slowly becoming unstable mentally (the ghostly haunting of the girl in the gas mask works quite well even if the gas mask seems out of the left field), the film does balance it out to pristine measurements to make the second half a real nail biter.

Despite some hit or miss performances and a low budget, the cleverly blended writing and strong aesthetic brought out by the director fill in many of the weaker moments and gaping plot holes of logic. "I Didn't Come Here To Die" is not a great film, but the potential show by its artistic work and concept surprises in solidity and overrides many of its flaws.