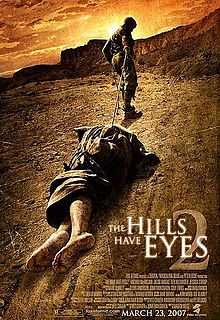 This remake franchise is completely baffling. The initial remake of the Wes Craven classic was a sleek, brutal, and intense leap that proved French director Aja was a legit new force in horror cinema. Everything about its theatrically released sequel (which is not a remake of the Wes Craven crapper sequel) is as bad as the first entry was good. It's completely illogical, its by the numbers in many of its aspects, and the execution for the film can be down right jaw dropping in ineptness. It leaves one a bit speechless.

A group of national guard trainees are tasked with delivering new electronic surveillance equipment to a group of scientists and military personnel that have been tasked with finding the mutant miners in the desert from the first film. When they arrive though, the camp is barren with no sign of the people to receive the shipment. So they venture out to investigate what happened...only to discover that the mutant miners are two steps ahead.

"The Hills Have Eyes 2" is further proof that Wes Craven's career has tanked in the last handful of years. Although he didn't direct the film (but he would go on to direct a modern blackhole like "My Soul To Take") he does have a co-writing credit for the film and the writing is one of the biggest problems with this film. Potentially, it could have rocked. Army vs mutants in the desert? Sounds like it should be a great campy time! It's not. It's just kind of sad. None of it makes sense plot movement-wise and characters do ridiculous things and say asinine things the entire time. Why are these recruits acting like high school jocks jibber jabbering at one another? Why does the leading lady run like she's had NO military training at all? It's frustrating because its not even bad enough to earn that unintentional hilarious factor...it just borderlines idiocy.

To make matters worse, the elements we are given on-screen are heavily below par too. The acting is atrocious with lines that evoke eye rolling and muting of the TV, the directing is by the numbers, and the special effects seem weak for a film where the kills and villains should be a highlight of its visual style. The mutants look like rejected make up from the first entry with their goofy oddities and superhuman like abilities. It has its moments (the guy being sucked into the tiny hole is pretty intense) but overall the film just lacks the style and punch that the original one set such a high standard with.

"The Hills Have Eyes 2" easily feels like the direct to DVD bad sequel that this franchise seemed to want to go for instead of the theatrically released follow-up that should have raised the stakes on what was delivered with the first entry. It's cliche in its foundations and the film built on those is poor at best. Not exciting and certainly not the brutally artistic film it should have been.